Hunting down and killing animals for profit and pleasure.

Relentlessly hunting Bambi and his allies.

Hunt and kill Bambi and the animals everywhere in the forest (failed).

Man is the unseen main antagonist of Disney's 5th full-length animated feature film Bambi (which is based on the 1923 Austrian novel Bambi, a Life in the Woods by the late Felix Salten), and the unseen overarching antagonist of its 2006 midquel Bambi II.

While being a silent character in the first film, he was voiced by the late Frank Churchill and the late Edward H. Plumb (the film's composers who voice him with music) in the first film and his deer call was provided by Carolyn Hennesy (who also played Bambi's Mother in the same film) in the midquel.

Man is notable for the fact that he was never seen onscreen. He is an unseen, slender, muscular man with brown hair and gray eyes. He wears a yellow coat, light gray gloves, a red shirt, blue jeans, and black boots.

Very quiet and mysterious, Man is a sneaky, cruel, uncaring, destructive, and murderous hunter who has no consideration for animals or at least, has little regard for their lives.

He has been consistently ranked very high in Disney villains lists, as well as other villain lists in general and has been argued by some as one of the greatest villains of all time, proving that it is often what one does not see that is truly terrifying and dangerous. Man is also shown to be very iconic and quintessential due to how he always has a tent near him and enjoys fire.

There may be more than one of him hunting in the forest, as book adaptations of the Disney film show several tents in Man's den. This is also supported by the novel where several times, hunters treat the deer differently.

Instead, his presence is seen via violent and detrimental acts, such as the shooting of Bambi's mother (classifying Man as a poacher since killing deers and fawns is illegal in many parts of the United States) and other animals, as well as the setting of a massive forest fire (either out of negligence or malice). That said since the viewers do not know anything about him, one could argue that he hunts animals to provide for his family.

Man also utilized a large pack of hunting dogs near the climax of the film in order to hunt down the fleeing wildlife.

Despite being the main antagonist and having his actions playing a critical role, Man's role is small. He is never given a proper name, motive, sound effects (except his gun), or any speaking lines, but he is presumably a poacher (most likely part of a larger group) who has been encroaching on Bambi's native home for a substantial amount of time. His presence is always met with equal fear and awe by the many woodland animals.

He is first addressed when herds of deer gather in a clearing to see the Great Prince. Soon, ravens warn them of Man's presence and they all scatter in fear. As the Great Prince reunites Bambi and his mother, a gunshot is heard. It is unclear whether Man has missed or killed one of the deer, but it is unlikely. Bambi is then informed of his mother about the dangers of Man as they walk away.

One day during the winter, Man returns and Bambi's mother senses his presence. She warns Bambi and they flee as Man shoots at them. Bambi manages to escape, but his mother ends up getting killed off-screen. As he searches for his mother, he is informed about her death by the Great Prince, who reveals himself to be Bambi's father. Mourning for his late wife and taking pity on his son, the Great Prince raises Bambi for a year.

Following the defeat of Ronno, Bambi senses smoke coming out from the sky, and spots a camping site. The Great Prince arrives to the scene, telling Bambi that Man is at the camping site, having returned this time with a larger hunting party and a pack of hunting dogs. As Bambi was searching for Faline, Man attacked the forest after an unnamed pheasant drifted into madness in which she would be killed on the spot by Man while attempting to escape her fate. The other poachers began to fire, killing multiple animals somewhere in the wilderness (though it was seen off-screen), while other animals ran away for shelter.

As the hunt was going on, Man and the poachers released their dogs, who then chased Faline into the rocky hills of the forest where she was cornered until Bambi arrived to fight them off one at a time. Despite the dogs outnumbering him, he managed to overpower the dogs while allowing Faline to escape. Bambi then defeated the dogs by leaping onto the cliff and causing the unstable rocks to crush all dogs to their deaths.

After Bambi defeated the dogs, he took a jump from one cliff to another, only to end up being shot by Man himself. The situation currently remains unclear, as Man's gunshot towards Bambi would be his final shot, though it wasn't fatal as Bambi would later be helped and comforted by his father. As suddenly without warning, the poachers' campfire started to spread and cause a rapid wild forest fire, forcing Bambi, Faline, the Great Prince and the other animals to escape from the inferno.

Although he is no longer shown onscreen, it was revealed that the Man died in the fire, in a scene that was cut from the original film. This would be the only shot of him onscreen, revealing that his corpse was crushed by a tree, showing only his arms and his rifle as well. Whether or not that is still his official fate is up to speculation.

A period of time after his mother is killed, Bambi falls asleep waiting for his father to return. He awakens after a dream about his beloved mother to the distant sounds of what appears to be her calling him. Bambi follows the voice to the edge of the forest. Upon arriving at an open meadow, the voice continues and Bambi enters into the opening. However, a flock of crows from a dark tree line flies above cawing about Man's presence, indicating that Man is waiting in the treeline and has just lured the fawn into a trap with a deer call. Man unleashes three dogs and they approach Bambi as he freezes in terror.

The crows alert the Great Prince, who comes to his son's aid and fights off the dogs, causing them to retreat to the treeline. However, the Prince spots a glint from his rifle in the treeline and he and Bambi flee the meadow as Man fires a shot at them.

Even though this was the only scene that he was in, Man probably set up a trap in the climax that would alert the dogs if anyone was captured. When Mena gets caught, the dogs come, scaring Ronno away. As the dogs approach them, Bambi leads them away and a chase is ensured throughout the entire forest until Bambi manages to defeat them.

Although he is never mentioned in the live-action sequel, it is strongly implied that he didn't survive the previous wildfire, as he is no longer shown hunting down the local wildlife of Wildwood Heart and therefore, the animals are now safe from being persecuted by hunters.

In the novel, man is known to the animals as "Him" and is believed to have an invisible third arm that he uses to kill. Both the wild animals and the hunting dogs believe Him to be an all powerful being. In the scene where Bambi's mother is killed, a hare friend of Bambi is also killed and Faline's brother, Gobo is unable to escape in time with his sister and Bambi.

Many seasons later, an adult Gobo reappears to the deer's shock with a strange collar around his neck. Gobo explained that Him took him, nursed him back to health, took him to his home and eventaully returned him to the forest. Gobo says Him is all powerful and is now a friend, his collar protecting him. However when Him arrives again to hunt in the forest, Gobo approaches him and much to his shock, is shot and killed despite his collar being around his neck.

Near the end of the novel, Bambi's father, the Great Prince, shows his son a corpse of a hunter, whom had been shot. The Great Prince uses this to show Bambi that "Him" is not omnipotent.

The storyboard of a deleted scene that shows Bambi's mother getting shot by Man. 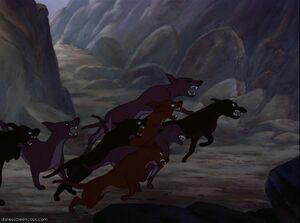 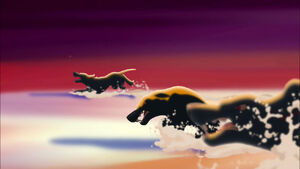 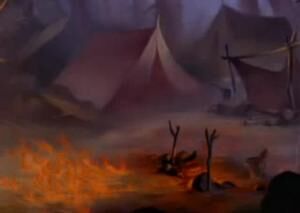 Man's Camp at the start of the Brushfire. 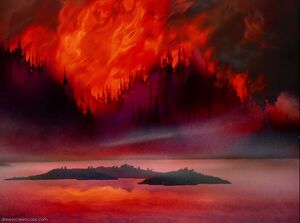 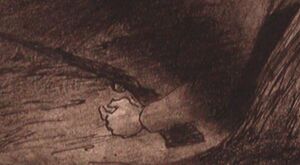 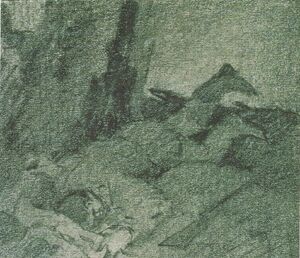 Art of Man by Mel Shaw. 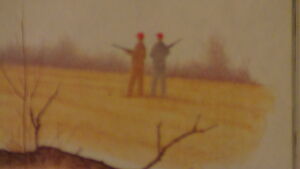 Man, as he appears in the book Bambi Grows Up. 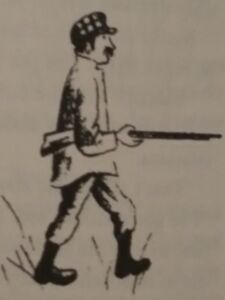 Man as he appears in Barbara Cooney's 1970 illustration of Bambi: A Life in the Woods. 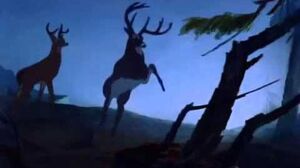 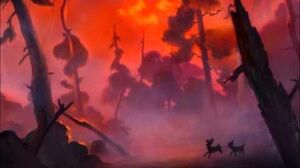