Sitting in his room depressed.

Create a tumor.
Murder his dog (all succeeded).

The Man is the unnamed main antagonist of the YouTube animation Dog of Man, created by the bizarre genius known as David Firth, who also made Dr. Papanak from Salad Fingers.

In the video, the man appears sad and depressed because he has nobody. Therefore, he has no friends. Then his dog appears, telling him that he should get his own tumor and that the tumor would become his friend. The man listened and went to the store, buying a bag which creates tumor.

As the man is in the store, he cuts his skin open, letting the tumor enter his body. As the man went home, the tumor became bigger and bigger and the man was close to dying. The dog appears again, telling the man that it will give its body for the man to survive.

The man then brutally cuts the dogs body parts and cuts his head off. Appearing again with the dogs body he thanks the dog for giving its body. 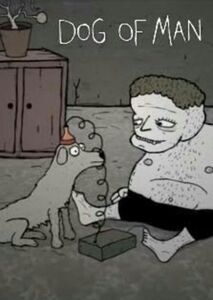 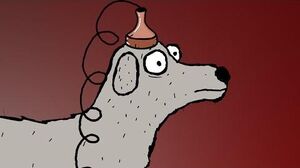