The Man is the main antagonist of the Aphex Twin's music video Milkman, created by the British animator known as David Firth.

The Man resembles the famous tragic villain known as the Frankenstein. He appears to be a tall-pale tanned man, with a very long head. He appears to be wearing black pants, brown shoes and blue shirt. While one of his eyes is bigger then his second one. He also appears to be having long black eyebrows and messy black hair.

In the video, the Milkman drives his truck around town, delivering milk to various friendly people in flats. Eventually, he visits a derelict flat where the Man pulls him inside and he is decapitated with a rusty knife by the Man.

The Man then engages in cannibalism and necrophilia with the Milkman's corpse. The Man then leaves his flat and once outside, he goes on mass murdering spree. First he stabs an elderly woman to death, and then after wondering into a random house, he murders the occupant by striking him in the back of his head with an axe.

He then returns home where he, again, continues to violate the Milkman's corpse. In the Milkman's pocket, he finds a photograph of his wife, motivating him to target her next. Arriving at the Milkman's home, wearing the Milkman's hat, he stalks the Milkman's wife. She screams once she notices him, but he shoots and kills her. He drags her away, and engages in necrophilia with her corpse too.

The Man then sees the Milkman's son, standing in the doorway, watching his mother's corpse get raped by a stranger. He pauses, but still decides to shoot him. Now realizing all the people he has murdered and distraught, he puts the gun in his mouth, shoots, and kills himself. 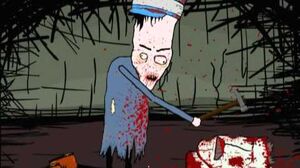