Take over the world (both failed).

He has been voiced by John Rhys-Davies and Bob Joles.

Man Ray is a manta ray/human hybrid with a blue helmet that is shaped like the head of a manta ray and has red skin. He also has gloves, boots and a speedo which all have a deep blue color. He also does not have a head under his helmet.

He is one of the main antagonists in SpongeBob's favorite Saturday morning show, The New Adventures of Mermaid Man and Barnacle Boy. Man Ray has a belt that is controlled by a remote. When you press the button, it tickles him. His name is a reference to a manta ray, yet episodes of SpongeBob SquarePants rarely feature a manta ray.

Man Ray was somehow arrested by Mermaid Man and Barnacle Boy and imprisoned in a frozen tarter-sauce prison. SpongeBob and Patrick, during their time watching the Mermalair during the heroes' vacation, accidentally free him from his prison, but are able to subdue him due to the tickle belt. Knowing that he needs to get rid of the belt in order to escape, Man Ray pretends to want redemption from being evil. SpongeBob and Patrick try to teach him how to be "good", through the demonstration of Patrick dropping his wallet and then struggling with a heavy package, but Man Ray gets quickly annoyed by Patrick's stupidity and injures him. In revenge, Patrick tries to push the tickle belt button too many times to torture the villain, but the remote then breaks, causing Man Ray to suffer eternal tickling. Man Ray says "Please" when asking it to stop, which is enough for SpongeBob and Patrick to "graduate" him from their "goodness" class. However, Man Ray double-crosses them, stealing some weaponry from the Wall of Gadgets and then tries to rob a bank. However, Man Ray still feels the tickle whenever he tries to rob the bank, leading him to give up and to open a checking account instead. He then apologizes to SpongeBob and Patrick for his actions and gives them his helmet before walking off, seemingly redeemed.

Man Ray would later return to being evil in future episodes and video games. 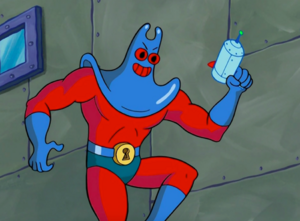 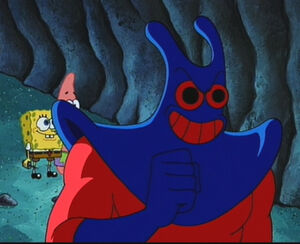 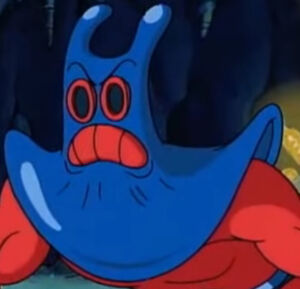 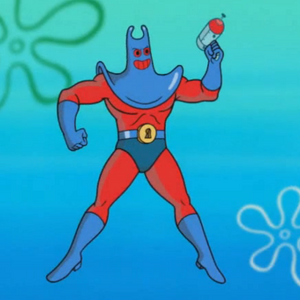 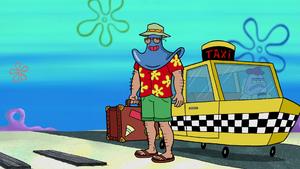