Manas, originally known as Anderson Le, is the secondary antagonist of the 2016 sci-fi action film Star Trek Beyond. He is Krall's second-in-command and a human who has been mutated into a reptilian form by alien extending technology.

He was portrayed by Joe Taslim, who also played Jah in Fast & Furious 6.

Anderson Le was serving as a Starfleet officer aboard the USS Franklin in the 22nd century. In 2164, when the Franklin went into a wormhole and crashed onto the distant planet Altamid, he, Captain Balthazar Edison and Jessica Wolff were the only survivors of the crash. During the years, Manas helped Krall with his plan to get revenge on the Federation doing so getting mutated by the alien technology causing him to cease speaking English and suppressing his human identity. He helped Krall and Kalara capture tons of alien ships with their swarm ship and drain the crew members of their energy in order to keep their immorality. At one point he killed Jaylah's father as he helped his daughter escape.

99 years later in 2263, he joins Krall's attack on the USS Enterprise. When he got on the ship, Manas kills many of the Enterprise's crew members at one point he pursuers Montgomery Scott through the ships engineering section and forces the officer to escape in a torpedo.

After the destruction of the Enterprise, Manas helped Krall round up the surviving crew members and held them at their base. When James T. Kirk and Jaylah attack the base to free all the crew members. He engages Jaylah in combat. He is killed when he and Jaylah fall off a tall building but while Jaylah is teleported safety by Scotty to the wreck of the USS Franklin, Manas falls to his death. 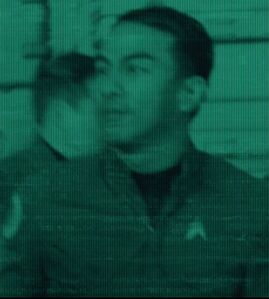 Manas' Human Form
Add a photo to this gallery

Retrieved from "https://villains.fandom.com/wiki/Manas_(Star_Trek)?oldid=3703930"
Community content is available under CC-BY-SA unless otherwise noted.