Polluting and destroying the environment.

Eradicate humanity (failed, for the time being).

He was voiced by Matt Stone.

He is described by Al Gore, who is dedicated to spreading awareness against him, as a creature who is "half man, half bear, and half pig" and wanders the Earth randomly killing everyone he sees. According to Gore, he is the single biggest threat to humanity today. Manbearpig's eponymous debut episode, in which he makes no physical appearance, presents Gore's hypothesis as absurd and untrue, parodying the real Gore's views and activism regarding climate change A.K.A. global warming. However, in light of subsequent real-life findings indicating global warming to be a more genuine and significant threat than previously believed by most, Manbearpig is revealed to actually exist and comes to walk the Earth during Season 22.

He appears as the eponymous main antagonist in the episode of the same title. In this episode, after being trapped in Cave of the Winds by Al Gore, the boys must find and kill Manbearpig, but they can't see him.

Manbearpig returns in the "Imaginationland" Trilogy as a supporting antagonist (with Eric Cartman serving as the main antagonist). When the portal between Imaginationland opens, Manbearpig rampages in a government laboratory. Manbearpig kills various people, including Kyle. Fortunately, however, Cartman successfully revives Kyle, but only to later force him to suck his balls. Manbearpig is sucked back into Imaginationland, but pulls Stan with him. Al Gore pores over security footage and uncovers evidence of Manbearpig's existence. Upon learning this, he declares that the imagination must be nuked. The government agrees, but only because Imaginationland has a terrorist connection.

Manbearpig is later seen in the battle for Imaginationland in the climax of the trilogy. However, his ultimate fate remains unknown. Manbearpig was likely killed by the nuke, but Butters presumably brought him back to life along with everyone else in Imaginationland. Additionally, since he was revealed to be real, this imaginary version of Manbearpig could have possibly been created by Al Gore's imagination and understanding of him.

Manbearpig reappears, this time as a real character, as the main antagonist of "Time to Get Cereal" and "Nobody Got Cereal". Manbearpig first appears when it attacks Ned, presumably killing him in front of Stan. He then kills a child named Colin Brooks and goes on a rampage throughout the town, even attacking a group of people in a Red Lobster, yet everyone denies its existence. Stan and other boys then seek out Al Gore to help them stop this beast. After summoning Stan, it is revealed that Manbearpig is a demon from Hell called a Sifer of Fate, a demon that appears every generation to exploit mankind's weaknesses and make a deal. They conclude someone in town made a deal with Manbearpig and now he has come to collect. Before they can do anything, the boys are arrested for the crimes that Manbearpig committed.

After escaping jail, the boys regroup to figure out how to beat Manbearpig. All the while, the beast continues to go on a rampage, slaughtering and killing thousands. It's revealed the people who made the deal with Manbearpig were the senior citizens and Stan's grandpa, Marvin. Assuming they'd be dead by then, the seniors made a deal with Manbearpig for cars and ice cream. The boys pursue Satan to challenge Manbearpig, which he agrees to. Despite putting up a valiant fight, Satan is badly beaten and killed by Manbearpig, becoming an angel and descending to Heaven. Now with no other option, the town agrees to help Stan and the boys and meet with Manbearpig and his lawyer. Manbearpig agrees to leave as long as they give up soy sauce and Red Dead Redemption 2. The town denies this change and Stan and the boys make a new deal, allowing Manbearpig to return in five years. 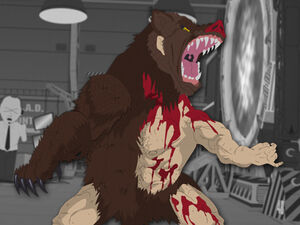 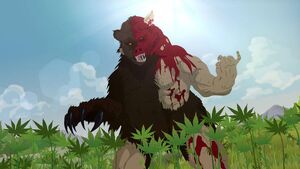 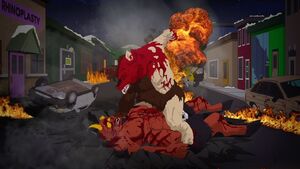 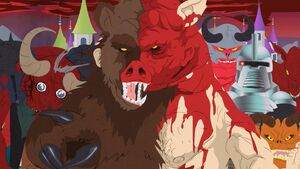 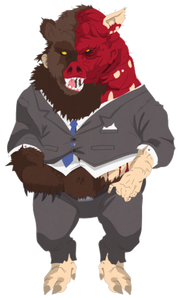 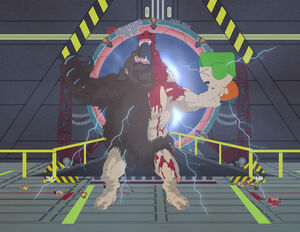 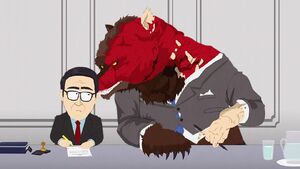 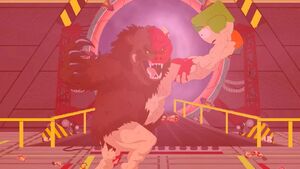 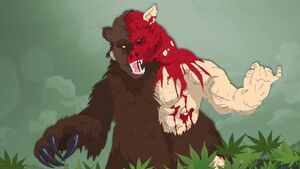 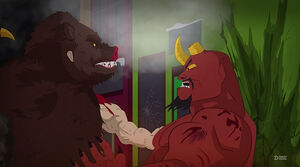 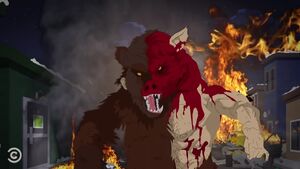 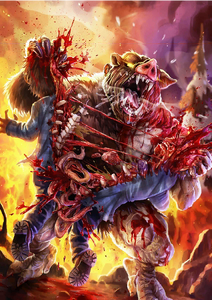 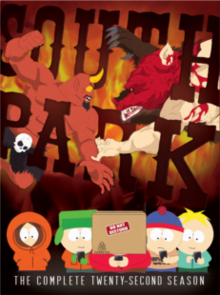 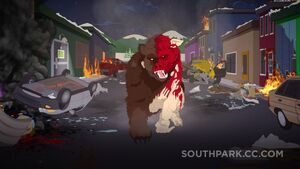