Manboy is a major antagonist in the 2016 version of The Powerpuff Girls. He seeks to turn the city of Townsville into the city of "Mansville".

He was voiced by Maurice LaMarche, who also voiced Lrrr, Yosemite Sam, and The Brain.

In the sixth episode of the 2016 TV series, Manboy attempts to destroy the Zen-Aissance Fair using his Manbot, but is intercepted by Buttercup, who he enrages by calling her princess. His Manbot puts up a fight for a short period but is ultimately destroyed by Buttercup after throwing Manboy across the city. Manboy is seen later in his dwelling, plotting revenge against Buttercup. While there he carves wooden heads of the Powerpuff Girls using his chainsaw, with Buttercup at the top. Out of anger, Manboy throws his chainsaw at the Buttercup carving, but it simply bounces off, to Manboy's grief. He later returns to Zen-Aissance Fair with a wooden cannon being pulled by a polar bear and an army of animated T-bone steaks. Buttercup, who has converted to a more peaceful state of being, simply puts a flower in the cannon and is shot by it. When Blossom and Bubbles are having trouble defeating Manboy's meat army, Buttercup uses the training she learned from Guru Chillaxi to defeat Manboy, burning his beard off with her heat vision and tossing him into a giant pile of tofu.

Manboy is a diminutive but imposing individual with a slightly muscular build in his small, youthful body. He has bushy red hair, mustache, and beard, and he wears a red flannel shirt, blue pants, reddish-brown boots, and a yellow belt with a capital "M" on the buckle.

In promotional material, Manboy is described as being "born of brawn and musk". He appears to be very misogynistic, as he glorifies manhood and belittles womanhood. It is this character trait that quickly gets him on Buttercup's bad side.

Being manliness personified, Manboy possesses considerable strength and endurance for his size. He can grow his facial hair to incredible length and control it like a prehensile limb. He also possesses enough technical prowess to construct a giant robot out of wood, which he controls using only his "manly will". 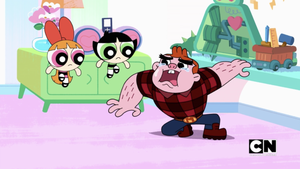 Retrieved from "https://villains.fandom.com/wiki/Manboy?oldid=4119090"
Community content is available under CC-BY-SA unless otherwise noted.