Leader of the Tong

Powers of the Makluan rings

Spend time with Tony Stark and his friends

Acquire all the Makluan Rings and rule the world

Power-Hungry Archenemy
Gene Khan, formerly named Temugin, is the main antagonist of the animated series Iron Man: Armored Adventures. He is the show's version of The Mandarin (despite being incredibly different from his comic book counterpart). He was voiced by Vincent Tong, who also voiced Namagem.

Years ago, the original Mandarin's last descendant, Temugin, had dreams of the ten Makluan Rings and the Makluan alien race. He had then learned the story of the Makluan Rings from his mother and how he is destined to have them all. They already have one of the rings and as they were planning to go on a quest to find the rings, his mother remarried a man named Zhang. She unfortunately died shortly after (it is not said specifically how, though it mildly implies she was killed), and, to Temugin's rage, Zhang claimed the ring for himself. He then used it to take the title of the Mandarin and became leader of his own criminal organization, the Tong.

Once he attained all ten rings, Gene intended to utilize their almighty and limitless godlike abilities to "take back what was his" by returning his late mother to life.

In the present days of the show, Temugin changed his name to Gene Khan and he managed to take the ring back from Zhang and imprisoned him, posing as him in front of his men, thanks to the armor. As the new Mandarin, he successfully took another ring from Obadiah Stane, and faced for the first time, Iron Man. Now leading the Tong as he could, Gene started conflicts with the Maggia. As Gene, he ironically befriended Tony Stark, and enrolled at his school when discovering Stark could help him find the rings. This later causes Gene to team up with Stark, Rhodes, and Pepper in order to get the rings.

As the story progresses, the team finds one after the other the temples where the rings are. Though Gene succeeded in getting his second ring activated and later took the third active ring from Iron Man, it was Tony/Iron Man who passed the tests each time, causing Gene to feel unworthy of the rings (a notion Zhang took pleasure in reminding his stepson).

At the same time, Pepper, who until now had a dislike of Gene (due to his stepfather rumored to be a criminal), eventually tried to befriend him in order to keep her friendship with Tony. This accidentally caused her to be taken prisoner by Count Nefaria during a diplomatic discussion between the Maggia and the Tong. Despite the risk, Gene tried to find a way to save her, voluntarily calling Iron Man to do it. However, as Iron Man was forced to fight the Black Knight, Nefaria's henchman, Gene has to save Pepper as his normal self. All of this causes the Tong men to start having doubt about their master's identity.

Ironically, after this, Pepper became obsessed with him (causing him to cringe when he hears there were 11 messages left on his phone as well as she keeps asking about him), and even suggests to Tony and Rhodes to tell him about Iron Man (though she eventually changes her mind).

Gene eventually succeeds in passing a test, saving in the process, Tony, Rhodes, and Pepper, and all of humanity (despite not being with them, as he told Rhodes what to do by the phone). This is the first test he had personally passed.

Eventually, Zhang returns from his imprisonment and reclaims the ring from Gene. He then orchestrates Tony and Pepper's capture and learns that the fifth ring is in Machu Picchu, Peru. Zhang ends up retreating when the Test of Sacrifice begun with the awakening of Fin Fang Foom. Pepper tries to pass it by throwing the rings into Fin Fang Foom which doesn't work. Rhodey in his War Machine Armor managed to learn Tony and Pepper's location from Zhang. It was then Gene learned that Tony was Iron Man. Gene eventually passed the test by allowing Fin Fang Foom to swallow him when he saved Pepper. Inside the dragon, Gene found the four rings as well as the fifth.

Upon coming out of the dragon, he revealed to the others that he was the Mandarin and fights Iron Man. It was during the battle that Tony learned that he was behind the explosion and had abducted Howard Stark for info on the Makluan Rings. Gene manages to get away. Some minutes later, Gene was dissatisfied that he wasn't made stronger until the five Makluan Rings reveal to him that there are five more rings hidden on Earth, meaning there were ten rings in all. He then declares that their power will be his and that he will become the one true Mandarin.

Gene now searches for the remaining five rings to complete his quest with the kidnapped Howard Stark accompanying him. Gene has located the sixth temple, defeated its guardian, the Melter, and took the sixth ring.

Gene and Howard eventually found the seventh temple and prepare to face its guardian, the Sunturion. He defeated it and took the seventh ring.

Mandarin and Howard Stark arrive in Latveria to find the ninth Makluan Ring. Mandarin learns that the temple's guardian is the Grey Gargoyle which has already been defeated by Doctor Doom. Mandarin goes to Tony Stark for help who confiscates the Makluan Rings when Gene collapses from Doom. Upon recovering, Gene states to Tony that Doctor Doom had captured him and Howard and that they have to work together save Howard Stark from Doctor Doom. Iron Man gives Gene one Makluan ring to get them to Castle Doom. Upon ending up in a death trap, Mandarin tells Tony to give him the other rings in order to increase his powers, but Tony finds another way out as he and Mandarin get out of danger. Iron Man and Mandarin confront Doom who then puts on the ninth Makluan Ring. During the fight, Mandarin tells Iron Man to give him one of his rings to help fight Doctor Doom. When Iron Man gives Mandarin one of his rings, they do a combination attack on Doctor Doom (which turned out to be a Doombot with a fake Makluan Ring). Upon finding a secret chamber in Castle Doom, they find Howard Stark in a cube cell only to be attacked and imprisoned by the real Doom, who mentions that he has tapped into the ninth Makluan Ring to create wormholes across the planet. Doctor Doom then uses the ninth ring to summon a being named Yogthulu and offers him three pure souls (Iron Man, Mandarin, and Howard Stark) in exchange to be reunited with his family. When in Yogthulu's dimension, Yogthulu declares that Mandarin is not a pure soul. Mandarin demands that Tony give him the other Makluan Rings to him in order to get out of Yogthulu's dimension and fight Doctor Doom. After Howard Stark manages to shock Doctor Doom, Mandarin gains back the ninth ring and closes every portal that Doom has conjured in the world. Mandarin then teleports away.

The End of the Search

When looking for the tenth ring, he has a vision back in his throne room of his mother and the strange drawings that he drew when he was a kid. He then goes to China to find the tenth and last ring. He has been going through the temple for two days. His actions caught the attention of Iron Man, War Machine, and their new partner, Rescue. He turns into the Mandarin and fights them. Their battle leads to the ring chamber, where Mandarin finds the guardian of the ring. It is a Makluan, a reptilian alien whose species were the creators of the Makluan Rings. He tells them the origin of the rings and how the tests were made. The Makluan judges that Gene is not worthy to have the tenth ring. Furious, Gene tries to take the ring from him. At first, he has trouble, but he realized that he can be defeated. The armored trio try to help the Makluan, but in the end Mandarin defeats it, leading to it evaporating. Gene then takes the tenth Makluan ring. He is awestruck by the immeasurably limitless god-like cosmic power that he has gained. He is struck by Howard Stark's new neutralizer device, but he easily vaporizes it. He teleports away, promising that he will show them and the world his newfound power and order.

Before the Makluan Invasion, Mandarin delivered his proclamation of his new world order to the entire planet. His action caught the attention of SHIELD, but he took them down like they were nothing and trapped the Helicarrier in the Negative Zone. He was then interrupted by Iron Man, War Machine, and Rescue. They fought but were interrupted again by a Makluan space fleet. The Makluan overlord teleported Gene to his ship and took his rings back. He then teleported the armored trio and Gene to his gladiator arena so they can fight against his greatest warriors. They eventually beat them, then the overlord brought out his giant, berserker warrior. The berserker at first dominated the four, but Iron Man found a weakness inside its hammer and defeated the berserker. Angered, the overlord teleported the armored trio back to Earth and kept Gene as his prisoner.

Gene was reduced to being a pet for the overlord. He realized that their motives for the Earth were similar and Gene realized the error of his ways. When the armored trio and the Hulk, showed up in his throne room, they all fought him. The overlord easily subdued Hulk, turning him back into Bruce Banner. Tony struck the overlord with Howard Stark's quantum neutralizer beam, temporarily deactivated his rings, putting them on the floor. Gene used this opportunity to reclaim the Makluan Rings, becoming the Mandarin again and blasted the overlord. At Iron Man's request, Mandarin teleported Pepper, Bruce, and Rhodey back down to Earth before the ship's reactor core blew up. Iron Man survived and fell to the ground. Gene escaped from the area, bringing back the Helicarrier from the Negative Zone. He teleported back to China, thinking that maybe he wasn't supposed to rule the world, but maybe to protect it. He then flew away into the heavens. 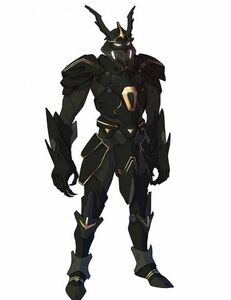 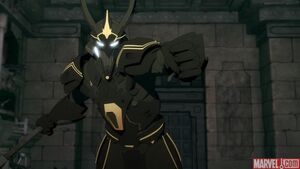 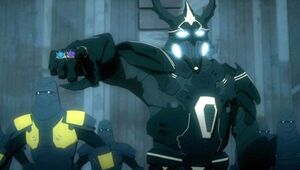 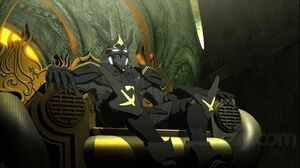 The Mandarin on his throne. 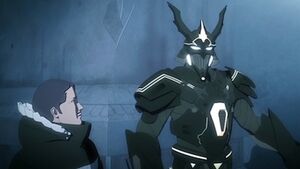 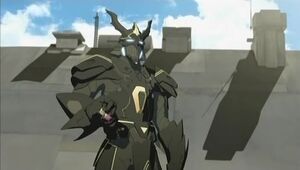 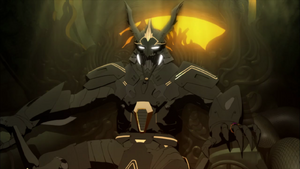 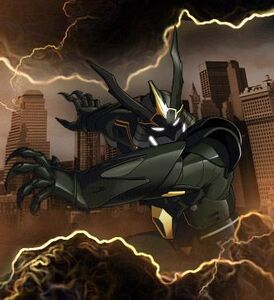 Retrieved from "https://villains.fandom.com/wiki/Mandarin_(Iron_Man:_Armored_Adventures)?oldid=3930372"
Community content is available under CC-BY-SA unless otherwise noted.