Seeking power over the Orgs.

Eating junk and other foods.

Mandilok is a General Org and a major antagonist of Power Rangers Wild Force, and leader of the Org Generals. He was sought out by Jindrax and Toxica to aid them in exposing their fake leader Master Org. For a time, he is the leader of the Orgs until Master Org himself returned and resumed his power.

He was voiced by Ezra Weisz in a male voice, and Barbara Goodson in a female voice who also voiced Rita Repulsa and Mother Talzin.

Mandilok was freed by Jindrax and Toxica to replace Master Org after they found out he was just a human with Org powers. He got rid of Master Org and took command, but treated the two Duke Orgs terribly. Later when Kite, a friend of the Power Rangers and the resurrection of Animus, became angry at the humans for all the damage they had done to the planet, Mandilok manipulated him into turning on the Rangers and taking their Wild zords. The Rangers were then helpless against the next Org Monster after it grew to giant size, but after they showed they were still willing to fight even without their Zords, Animus restored Merrick's Wild zords and helped him in defeating the Org, then returned all the Wild zords.

Furious at losing the opportunity, Mandilok blamed Jindrax and Toxica for it, but was then approached by the Duke Org, Onikage, who had a plan to capture Princess Shayla. However Toxica accidentally messed up the plan, when she touched the sacred water on the Animarium, not knowing it harmed Orgs, incurring further anger from Mandilok. Her desperation to prove herself to the Org General led to her allowing Onikage to cut off her horn, which he told her would make her impervious to the water's effects and that it would grow back (a complete lie). Toxica succeeded in capturing Princess Shayla and brought her to Mandilok, becoming visibly weakened due to loss of her horn, but he only tossed her aside due to her weakened state. The Rangers arrived and fired the Jungle Blaster at the Org General, but Mandilok used Toxica as a shield against the blast, saying it had finally found a good use for her. Mandilok then made Jindrax bring Shayla back to the Nexus and had Onikage take on the Rangers.

It then went with Onikage, Jindrax, and Shayla to the rock quarry to meet the Rangers, where the Ninja Org offered to hold its weapon so that it could relax and enjoy its victory, which Mandilok agreed to. Upon the Rangers' arrival, Onikage then used his powers to create dark versions of the Rangers, the Shadow Rangers, and Mandilok watched as the Rangers struggled against them, congratulating the Ninja Org on his perfect trap. However Master Org arrived, now transformed into a true Org with a horn, and Onikage revealed to the General Org that he had been working for Master Org from the beginning and handed Mandilok's weapon to him. Mandilok attempted to attack Master Org, but was hit by a powerful energy blast from the Master's Org staff and destroyed him. However the General Org returned along with the other two generals, Retinax and Nayzor, to guard one of the pillars involved in the Org Heart ceremony, but failed and was destroyed along with the other two generals. Mandilok was then integrated into Master Org's new body.

Mandilok is quite powerful due to him being a General Org (surpassed only by Master Org himself) and wields a set of gigantic fork and knife weapons in battle, the later of which also forms part of the Nexus Blade, a combination of all the General Orgs' weapons. Mandilok can breath fire from the mouth on his chest and fire energy blasts from his hands, as well as teleport. 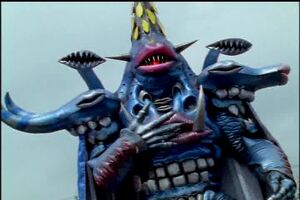 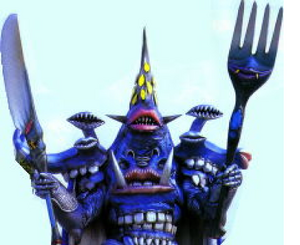 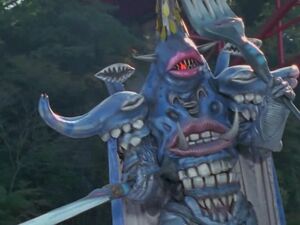 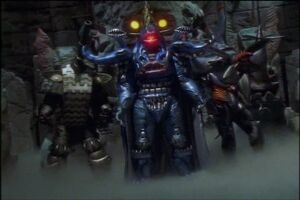 Retrieved from "https://villains.fandom.com/wiki/Mandilok?oldid=4084589"
Community content is available under CC-BY-SA unless otherwise noted.