Mandora (bearing the name of its leader)

Empire of the Dark

Vast military and ability to conscript from planets they conquered

Mandora (マンドラー, sometimes translated as Mandra or Mandler) is the main villain from the Terra Cresta series. The military force led by Mandora also bears the name of its leader.

The self-proclaimed Demon King Mandora is a alien overlord who seeks to rule the whole universe. Mandora have come to Earth and infested the planet with his alien minions and also revived ancient beasts from Earth's past. Unable to fight back the invasion, the Earthlings were forced to move to the bottom of the sea, leaving their weapons protected in hangars on the surface, awaiting for when the time came for them to be able to fight Mandora and its minions.

After a few years, the Earthlings formed the Terra Cresta organization with the objective to retake control of Earth, having successfully developed the Wing Gamiver airship which they send to the surface to fight against the invaders. The Wing Gamiver fights Mandora's monsters and recovers the weapons on the hangars, using them to power itself up and fight Mandora himself, who ends up defeated and forced to retreat.

Despite his defeat, Mandora regroups his forces and, after some time regaining his lost strength, once again attacks Earth intent on taking over the planet again. Knowing a new invasion would be imminent, the Terra Cresta prepared themselves, developing a new enhanced version of the Wing Gamiver fighter and, which they send to fight back the invasion once it begins. The Wing Gamiver defeats the invaders and attacks Mandora's headquarters in space, destroying the alien warlord and his evil military for good.

This is a remake of the original Terra Cresta. During the boss fight the POV shifts from 2.5D to 3D. So Players will engage Mandora and other bosses in 3D POV. But unlike the first two series, This game only features aerial characters.

Mandra makes appearance in another video game from Nichibutsu named Sky Robo (Fight! Big Fighter in Japanese) not as a boss but several mid-level minions. As it turns out, Mandora has been nothing more than an underling of the bigger bad that calls itself 'Empire of the Dark'. 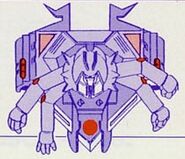 Add a photo to this gallery
Retrieved from "https://villains.fandom.com/wiki/Mandora?oldid=2371425"
Community content is available under CC-BY-SA unless otherwise noted.