Robot army that acts as his muscles

Conquer the universe and win over Stella Starbella's heart.

Tyrannical Supervillain
Mandrake the Malfeasant is an elderly supervillain in Wander Over Yonder and one of the biggest in the Yonder Galaxy with 15 planets under his rule. Despite he is currently feeble and weak, he was once the most feared and powerful villain in the galaxy, as well as the arch-nemesis of the galaxy's former greatest heroine, Stella Starbella. He is a remarkable parody of Ming the Merciless.

He was voiced by Keith Ferguson.

In his youth, Mandrake was the most feared villain in the Yonder Galaxy and did all manner of evil deeds and horrific events which were all usually thwarted by Starbella, his unrequited love. Eventually he got too old and retired.

Years ago, Mandrake came out of retirement to show all the young punk villains like "Lord Hatred" (that is how he calls Hater in mockery plan) what real villainy was all about. His first easy victory was kidnap the King of Sherblorg 7. However, Starbella, with the company of Wander and Sylvia, soon arrived to stop him, but the trio was quickly trapped by Mandrake. Mandrake then gloated his victory and how he would soon be the greatest in the galaxy, but then quickly made Starbella know how hurt he was that he was never able to conquer her heart, however she quickly corrected him that its his own fault for never trying to just have a good time with her. She then escaped his trap, defeated his robots, and saved the king, Wander and Sylvia singlehandedly, all before making Mandrake's ship self-destruct. However she did not wish to leave her old foe behind as he fumbled on his computer so she then carried him to safety. The group then had a peaceful tea time on the ship while enjoying cookies, Mandrake included (although while locked in a cage).

However, Mandrake was somehow able to escape Starbella's custody and continued his plans for conquest, eventually conquering many worlds and rising all the way up to the top ten on the galaxy Villains.

More later, Mandrake, like the other villains and armies in the Yonder Galaxy, heard a rumor about a "ring of invincibility" in an asteroid field, and goes with his robot army there proceeding to do battle with those who had come for the ring. During the battle, Mandrake eventually comes across Wander and Lord Hater and releases his robots on them, however Wander distracts them by making them do the robot dance, much to Mandrake's anger. Mandrake then prepares to blast them with a powerful beam of energy from his scepter, but he soon begins coughing and states that he is too old for this nonsense. He then slowly walks away to take a nap elsewhere.

In the episode "My Fair Hatey" Mandrake's seen imprisoned with his robots in Lord Dominator's prison.

In the episode "The bad neighbors" he's seen along with the rest of villains in the Woyverse in a neighborhood planet fleeing the cataclysm caused by Dominator.

Mandrake's robots are robots created by their leader, Mandrake the Malfeasant, to help him in his conquests. Unfortunately, like Mandrake says, his acrhenemy's heart was the only thing they couldn't help him to conquer.

They are shaped-anthropomorphic tin robots who squeak through each step. We know are weak in combat because in the fight with the old Stella Starbella are defeated by being sprayed by her scourge and bitten by her dentures.

We also known that they aren't so clever because in the Royal Battle, when Mandrake orders them to attack Wander and Lord Hater that shows a radio of his hat and puts it in on, thus sounding a techno music that distract them making the robot dance.

In the past, Mandrake's robots was the most feared minion in the Yonder Galaxy and, under Mandrake's leadership, did all manner of evil deeds and horrific events which were all usually thwarted by Starbella, his unrequited love. Eventually they retired.

In the episode "My Fair Hatey" Mandrake's robots are seen imprisoned with their leader in Lord Dominator's prison.

In the episode "The bad neighbors" they're seen along with the rest of villains in the Woyverse in a neighborhood planet fleeing the cataclysm caused by Dominator.

Mandrake is a senile old man who appears to be quite forgetful and feeble, as well as sickly to the point where he may even appear as though he is gravely ill or dying. However, he is still a very evil and competent villain who (while having fallen from the top spot in his old age) is still one of the most notorious villains in the Yonder Galaxy. Even though Starbella and Mandrake are mortal enemies with an incredibly long history of conflict, Mandrake is in fact in love with Starbella and deeply regrets that her heart was the one thing he could not conquer.

Althought, due to his advanced age, Mandrake seems to be physically powerless and often appears sickly, likely making him quite weak, he is still a competent conqueror and he makes up for his physical weakness with the aid of his robot army. Said robots seem quite outdated and clunky but they're still quite dangerous, able to conquer planets on Mandrake's orders and even able to fight on par with other villainous minions. Mandrake also wields a large scepter with an "M" on it which is quite powerful and can shoot powerful and destructive beams of energy, which also makes up for his physical limitations and it also serves as a walking stick. 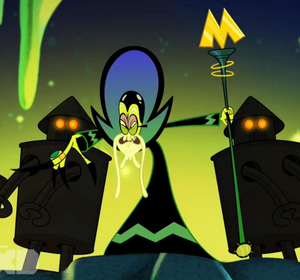 Retrieved from "https://villains.fandom.com/wiki/Mandrake_the_Malfeasant?oldid=4134937"
Community content is available under CC-BY-SA unless otherwise noted.