Outerversal powers (far beyond most other characters in DC Comics)

Consume all reality until only he remains

Dax Novu, also known as Mandrakk and the Dark Monitor, is a major antagonist in DC Comics and was primarily an opponent of the Cosmic Armor Superman (Thought Robot), a cosmic-scale event that saw Mandrakk nearly consume the entirety of the DC Comics universe.

Dax Novu was one of the most powerful and eldest of the Monitors, a species created from the splintered essence of the original Monitor, due to their flawed natures the Monitors became parasitic in nature and fed off reality, many Monitors denied this while other Monitors resisted it but Dax Novu was one of the few Monitors who fully embraced the parasitic nature and would be exiled as a result, earning the title of Mandrakk, the Dark Monitor.

After some time Mandrakk would return, intent on consuming everything, in order to counter him the Monitors created a massive cosmic robot in the shape of Superman, known as the Thought-Robot, powered by the minds of several Supermen from across the multiverse the Thought-Robot would do battle against Mandrakk's as the ultimate protector, the only thing standing between all of Creation and its extinction at the hands of the mad Dark Monitor.

Mandrakk was furious and demanded to be allowed to consume until everything was erased and only he remained, Thought-Robot stood defiant and would eventually defeat Mandrakk via pushing him back beyond Creation, preventing him from threatening reality via taking him so far from reality that even memory of Mandrakk eventually became erased, thus effectively sealing him away from the rest of the universe. 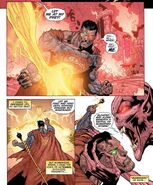 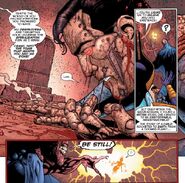 Add a photo to this gallery
Retrieved from "https://villains.fandom.com/wiki/Mandrakk_(Dax_Novu)?oldid=4299097"
Community content is available under CC-BY-SA unless otherwise noted.