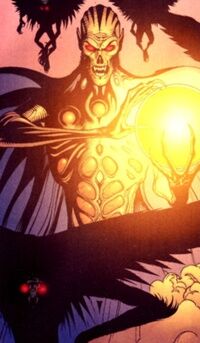 Monitor Dax Novu began as one of the few who listened. Ogama warped and monstrous in appearance as his feeding upon the Multiverse became increasingly overt. Ultimately, Novu became the hated Mandrakk the Dark Monitor, and was locked away.

Ogama poisoned Uotan's designated Earth, Earth-51, so that Uotan would be banished for negligence in his duties and his words would be discredited. He then began to undo the locks that held Mandrakk in his prison.

The Final Crisis provided enough distraction for Ogama to work at releasing Mandrakk, and by the time [Monitor Zillo Valla had organized a force to try and stop Mandrakk's return, the monster was unleashed, and only the [Super-Sentinel was able to stop him.

Together they went and faced off against Superman, but were surprised when Nix Uotan appeared, having managed to reclaim his powers as a Monitor. Uotan summoned an army from the whole of the Multiverse, and he was killed with a combined blast of heat vision from the Supermen of the Multiverse and a giant stake in the heart from the s Green Lantern Corps].

As Mandrakk, Ogama was able to draw energy from the Bleed, which he used in order to fly and shoot energy beams from his eyes and hands. He also managed to used this energy to alter reality, transforming Ultraman into the "Vampire Superman".