Manfred von Karma (in Japanese: 狩魔豪, Gou Karuma) is the overarching antagonist of the original Ace Attorney trilogy, serving as the main antagonist in Phoenix Wright: Ace Attorney and the first season of the anime series, particularly in the "Turnabout Goodbyes" chapter.

He is the "God of Prosecution" who is obsessed with protecting his perfect record of winning cases, forging evidence and killing anyone who stands in his way in order to do so. He is also the biological father of Franziska von Karma and adoptive father of Miles Edgeworth.

Manfred von Karma was originally voiced by Masakazu Sugimori in Japanese. In the movie, he was played by Ryo Ishibashi. In the anime, he is voiced by Akio Ōtsuka in Japanese and Bill Jenkins English.

Von Karma was known as the god of prosecutors. On his trials, he always played the judge, the attorney, the defendant and the testimonies like marionettes. The main characteristics of his achievements were perfectly clean testimonies and perfectly clean (if forged) evidence, leaving no shadow of doubt on anyone. He never lost a case, prizing his perfect record above all else.

Manfred von Karma was assigned as the prosecutor of what would be know as the IS-7 Incident. The defendant was Issei Tenkai (Jeff Master in the fan-translation), a famous pastry chef and TV star, who was the main suspect of the murder of Paul Holic, a sculptor who was participating in a contest Jeff hosted on his mansion, which incidentally was the crime scene. The attorney assigned to the case was Gregory Edgeworth, who directly confronted von Karma at the crime scene. While Edgeworth tried not to judge von Karma's actions based on the rumors of forgery, he eventually concluded that von Karma was indeed forging evidence, since the victim's body disappeared from the scene yet von Karma had an autopsy report.

The IS-7 trial dragged on for for a whole year, due to von Karma's machinations. Manfred von Karma ultimately won the case, as Jeff Master gave in and falsely confessed, being declared guilty of being an accomplice of the crime. However, Gregory Edgeworth was able to prove that von Karma forged the autopsy report and that Jeff's confession was forced, and because of this von Karma receive his first penalty. The case was then put on hold, due to the only other witness and suspect, Dane Gustavia, having fled the country. In truth, von Karma had no idea the autopsy was fake and Blaise Debeste had used him as a scapegoat to throw off suspicion on himself.

Von Karma's loss of his perfect record affected him deeply. Gregory and his son, Miles Edgeworth, as well as the bailiff Yanni Yogi, entered the elevator to leave the court, when an earthquake struck the building, leaving the three of them trapped. The oxygen inside the elevator started to run low, causing them to become desperate and confused. In a panic, Yanni drew his gun in an attempt to conserve oxygen by killing Gregory, but the attorney knocked it out of his hand. The gun fell near Miles, who picked it and threw it blindly at Yogi.

At that time, von Karma was near the elevator when the gun hit Yogi and fired. The bullet hit von Karma in the shoulder, who released a demonic scream that became the subject of Miles' nightmares for years to come. The three trapped in the elevator fell unconscious shortly afterward, and as the door opened, von Karma saw the three lying on the floor and the gun near them. Seizing the opportunity, von Karma picked the gun and shot at Gregory in the heart, killing him as revenge for ruining his perfect record. Yogi was accused of the murder, but found innocent because his attorney, Robert Hamond, forced him to plead insanity. But during Yogi's trial the court summoned Misty Fey, master of the Kurain Channeling technique in order to communicate with the deceased victim, Gregory Edgeworth. Fey succesfully channeled him but due to the fact that Gregory Edgeworth never saw the murderer he believed Yogi had murdered him. Redd White later bribed Marvin Grossberg into giving him information on this which he later sold to the media, leading to the destruction of the Fey Clan's reputation and leaving Morgan Fey's husband to divorce and leave Iris and Dahlia Hawthorne. Yogi's life was totally ruined; he lost his job as a bailiff and his fiance, Polly Jenkins, committed suicide. As such, he decided to live as a senile old man named 'Uncle', renting out boats at Gourd Lake.

In order to not raise suspicion, von Karma took a three-month vacation, this being the first and only time in his life that he ever took a vacation. He hid the bullet from everyone, and after healing from the shot, he decided that he would have an even bigger revenge on Gregory by adopting the young Miles and raising him along his daughter Franziska to become a ruthless prosecutor like himself.

Von Karma taught Miles everything about prosecution, and Miles became a prosecutor, as well as Franziska. Years later, von Karma put his revenge plan into work. He contacted Yogi through a letter, giving him instructions about a plan to take revenge on Robert Hammond and Miles Edgeworth, who Yogi held for his ruin. So Yogi contacted both Robert and Miles to go to the lake at different times.

As Robert arrived, Yogi killed him with a point-blank shot and threw him at the lake. As Miles arrived, Yogi and him used a boat to go to the center of the lake, and Yogi shot at nothing in particular just to call the attention of anyone who happened to be at the lake, the shot again and dropped at the lake, leaving the gun behind. Miles was obviously accused of the murder, and von Karma assigned himself as the prosecutor of the case, to make sure everything would go according to his plan, and to see Miles ruined by himself.

The day before the last day of the trial, Phoenix and his coworker Maya presented von Karma the letter he wrote to Yogi just as he was stealing all the evidence from the DL-6 Incident. He admitted to writing the note, but was not willing to let it be presented in court, for it would ruin both his career and his revenge. He then violently assaulted Phoenix and Maya with a stun gun and electrocuted them until they were both unconscious before stealing back the letter.

Even without the note, Phoenix acquitted Miles, but only for Miles to "confess" to murdering his father Gregory. Remembering evidence that TWO bullet shots had been fired, Phoenix became convinced that something else was happening. Although von Karma stole most of the evidence, he failed to steal the bullet recovered from Gregory Edgeworth since Maya managed to take it.

In the final trial, Phoenix realized that von Karma kept the bullet in his shoulder, so he used a metal detector to prove this. Von Karma tried to argue otherwise, but when Phoenix revealed the other bullet and got consent to remove von Karma's bullet, von Karma realized that he was finished and released the same scream that he had 15 years earlier. Edgeworth finally realized the truth as von Karma confessed, banging his head repeatedly against the wall screaming Edgeworth's name. After 40 years, the great Manfred von Karma had finally been defeated, and now he was exposed as the murderer that he truly was. Seeing that he finally lost, von Karma demanded the judge to end the trial so that he can face his punishment. The judge obliged, and von Karma was arrested for his crimes and died shortly after.

Von Karma slams his fist on the prosecutor's bench and bellows Edgeworth's name in rage while images of the DL-6 Incident flash behind him. He then begins to slam his own head against the wall behind him, getting faster and faster by the moment.

He appears once again in Gyakuten Kenji 2/Ace Attorney Investigations: Prosecutor's Path, being a central character in the third case, which is a flashback to Gregory Edgeworth's last case, where Von Karma got his first penalty and killed Gregory.

If his protégé was considered a "demon prosecutor", Manfred von Karma could be considered the attorney equivalent of Satan - he is obsessed with achieving a guilty verdict in court, and is willing to trample over anyone he wishes to get there. He often uses his forbidding and imposing appearance and personality to intimidate others into accepting his words, and often even acts for the judge because he is too terrified to speak in Von Karma's presence.

Ever the perfectionist, Prosecutor von Karma single-mindedly pursues victory in the courtroom (even if the defendant is innocent); whether it be forging evidence or murder, Manfred von Karma will do absolutely anything to get his guilty verdict.

In Ace Attorney Investigations, Von Karma is also shown to be restrictive with his daughter Franziska, which obviously reflected in her personality. However, his perfectionism is a weakness as well as a strength, and since Von Karma cannot stand to lose, he is willing to do absolutely anything in his power to prevent the defense from winning (going as far as to knock Wright unconscious with a stun gun).

Von Karma is incapable of showing love for another person, seeing it as a weakness. It's notable that when he is complementing somebody, it's their abilities or skills he praises rather than them. An example is when he mentions his wife's cooking in a positive light rather than mentioning his wife as a person. To Von Karma, people are pawns in his path to perfection, meant to be disposed when they are no longer useful to him. 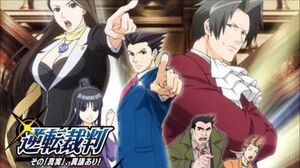