Seek revenge against Grannvale by starting a war across the land.

Manfroy is the main antagonist of Fire Emblem: Genealogy of the Holy War, and the overarching antagonist in its interquel Fire Emblem: Thracia 776. He is the leader of Loptr Church, a cult that worshipped the Dark God named Loptous.

He is also the true mastermind behind the Isaachian-Grannvaleian War that set off the whole game, being Sigurd's, and later Seliph's archenemy due to his role in the war and (to Seliph) Sigurd's death.

Manfroy is a bald elderly man with a red cloak and wears red robes. He wears purple in some images.

Manfroy was the Loptr Church's archbishop who was originally being forced into living inside a desert by Grannvale kingdom. In order to seek revenge against Grannvale, Manfroy used manipulation and assassination to start a second Holy War across the land in order to revive his Dark God. He also blackmailed Arvis into working with him by revealing his knowledge that Arvis carried the sinister Holy Blood of Loptous in his veins. To trigger the war, Manfroy used Duke Reptor of Fridge and Duke Lombard of Dozel to assassinate King Mananan of Isaach and Prince Kurth of Belhalla, starting the war between the nations.

After starting the war, Manfroy assisted Chagall into murdering the latter's father Imuka, the benevolent king of Agustria, and usurped his throne, starting a full-fledged war between Agustria and Sigurd's army. When Sigurd and his army was away for another war without his wife at his side, Manfroy kidnapped Deidre and brainwashed her, due to his knowledge over Deidre's lineage with major Naga blood and minor Loptous blood.

Soon, Manfroy reached Arvis and propose a marriage between him and Deidre, in order to give birth to a child that contained major Loptous blood, cuckolding Sigurd in the process. During the Battle of Belhalla, Manfroy also presented himself in Arvis' army, defeating Lewyn personally in the process. After the death of Sigurd and several of his companions, Manfroy had took full control over Arvis' empire.

Years later, after the birth of Arvis' children Julius and Julia, Manfroy used the Dark Tome of Loptous to corrupt Julius, whom he attempted to make him Loptous' host and his puppet. As the result, Julius was possessed by Loptous' dark spirit and murdered his mother under Manfroy's manipulation. Deidre sacrificed herself and died at the hands of Julius in order to protect Julia from suffering the same fate.

Under Manfroy's command, in addition, Julius and his allies from Friege began a cruel practice known as the Child Hunt that was started by his predecessors from the Loptrian Empire. The children between 7 and 13 would either become sacrifices to the Dark God, or fight to their deaths in arenas. The survivors would be crafted into Grannvalean nobles, in order to build a new Loptrian Empire in Manfroy's image.

However, Arvis was eventually horrified by what his son had become under the Loptr Church's conspiracy, becoming remorseful over his betrayal and cooporation with Manfroy. As the result, Arvis protected many captured children as much as he could in his final moments, hiding them at a church in Friege Castle with the help of Felipe and Ishtar, till Seliph's army arrived.

During the final battle, Manfroy played the same foul trick again by abducting Julia and brainwashed her, just like what he did to her mother, so that he would use her to kill Seliph and his companions, establishing Loptrian Empire from the ground. Nevertheless, thanks to Seliph, Julia was saved after he killed Manfroy, which would lead Julia to obtain the Book of Naga and doomed Julius and Loptous.

In Thracia 776, more of Manfroy's crime was revealed. He murdered his son-in-law and drove his daughter insane. He also had a granddaughter, Sara, who served as a supporting protagonist and a playable character in Thracia 776. If the player failed to make Leif to recruit Sara, Manfroy would make Sara a host to one of the Twelve Dreadlords and make her yet another of his puppet, meaning he had no regards over his own family, either. 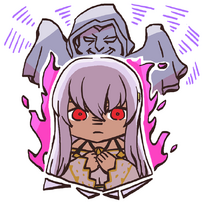 Retrieved from "https://villains.fandom.com/wiki/Manfroy?oldid=4372083"
Community content is available under CC-BY-SA unless otherwise noted.