The Hatred who Walks

To claim vengeance on Odin and destroy Asgard.

Mangog, also known as Mango and "The Mangog" is a powerful and destructive villainous monster appearing in Marvel comics as an enemy of the Mighty Thor and Odin, as well as the entirety of Asgard. He is the physical manifestation of a billion lives that were slain by Odin and seeks to claim his revenge by slaughtering those around him.

Mangog, or "The Mangog" as it originally referred to itself, is the sum total of the hatred of a billion billion beings that were once killed by the ruler of Asgard and the Norse Gods, Odin. Imprisoned deep beneath Asgard, Mangog is accidentally freed by the Rock Troll Ulik, and goes on to wage war against Odin and the other Norse Gods on several occasions. Mangog proves to be physically unstoppable, and is usually only defeated by exploiting Mangog's dependence on psychic energies (such as hatred, fear, or feelings of devotion) felt by other sentient beings to sustain itself. Without such a source, Mangog shrinks to near nothingness.

While usually acting independently, Mangog also assists one of the Thanosi clones of the Titan Thanos in a quest for universal destruction, but is ultimately stopped by the Thunder God Thor by shooting a bolt of Anti-Force inside the monster's mouth. Thor during the final Ragnarok eventually ends the threat of Mangog entirely: having inherited the Odin Force and the Knowledge of the Runes, Thor simply dissolves an attacking Mangog with a wave of his hand.

Months, perhaps even years later, amoral business-man (and possibly demi-god) Adam Mann constructs the Mysticator, a magical generator which taps into an otherdimensional source of energy to give him immense power. But when the generator is overloaded by the mace of Thunderstrike, it is revealed the source of its energy is actually the Mangog, which breeches through to Earth to renew his battle with Thor. Thor demands to know how it is possible that the Mangog lives again, and the monster proclaims that he can never be ultimately destroyed - he is living hatred, he feeds on it and grows, and will endure as long as hate exists.

The Mangog was banished, tumbling into a star; but it was already feared he would eventually return.

Years later, during a contest between Jane Foster wielding the power of Thor and the spiteful gods of the Shi'ar, the latter unleashed the 'ultimate judgment', a threat feared even by the immortal gods; it was soon revealed that this was the Mangog, who now came to devastate Asgardia. This time, the Mangog claimed to be an instrument of vengeance on the cruel and arrogant gods, and proceeded to defeat any of them -even the dread War-Thor, who wielded the hammer of the slain Thor of a destroyed universe, the disgraced Thor who now went by the name of Odinson, and Odin himself. His power burned greater than ever, propelled by indignance at the capricious ways of the gods.

When he confronted Jane Foster, he dismissed her as she was not a god, but a mortal wielding the power of one, and therefore not subject to his revenge; but she stood up for the gods, in the end binding the Mangog with the unbreakable bond Gleipnir to the hammer Mjölnir, casting it into the heart of the sun; the Mangog being unable to heft the hammer, he would be trapped forever.

However, it remains to be seen whether even this can stop the entity for good.

Mangog possesses the fearsome strength, stamina, durability and endurance of a "billion beings", considerably exceeding that of Thor and capable of defeating large numbers of asgardian warriors and storm giants. It has also the ability to manipulate magic for energy projection and shapeshifting.

He appears to be immortal and ultimately indestructible, existing so long as hatred does, and indeed draws strength from hate itself, even that of his enemies.

However, despite his tremendous power, Mangog is not completely invincible. Mangog's powers, in fact his very life itself, are connected to the energies that he feeds from. Mangog will shrink or seemingly vanish if deprived of those mystical and psionic energies. 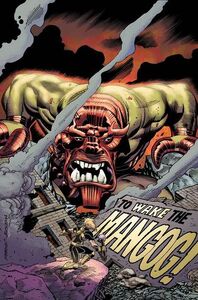 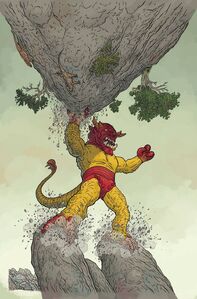 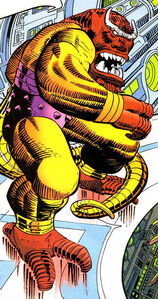 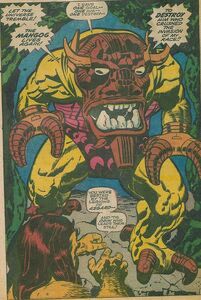 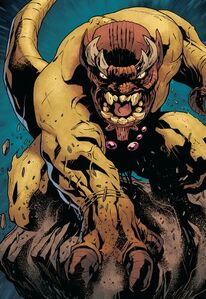 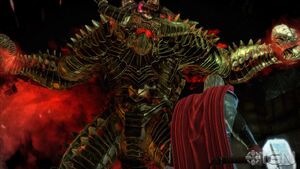 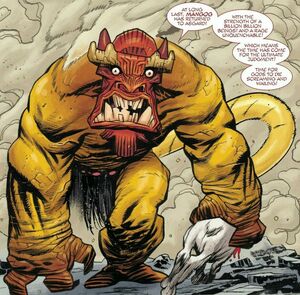 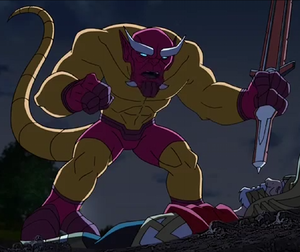 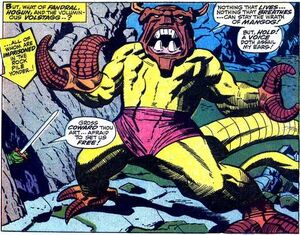 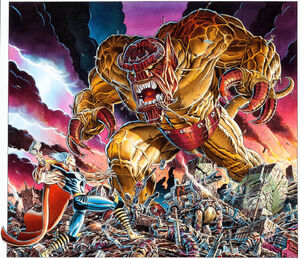 Thor vs Mangog by Giorgio Comolo