Assist Tau Zant in his goals.

Third Spear, Manmaruba is an insect-like member of the Seven Darkness Spears of the Jakanja and a major antagonist in Ninpu Sentai Hurricaneger. He has the ability to observe fate in an unavoidable way, making him a valuable asset to the Jakanja.

Following the death of Chuuzubo, Manmaruba went into his pupa state before emerging two episodes later in his adult form. Desiring revenge against the Gouraigers for deceiving him into thinking they were the last two spears, Manmaruba secretly infected Ikkou with a Space Scorpion egg.

Though observing Ikkou's death, Manmaruba also saw that he too would die and thus Manmaruba created a cocoon containing a clone of him to replace him when the fate comes to pass.

Observing a future where he triumphs and kills both teams during a deadly meteor shower, Manmaruba set forth to complete that future. He placed life-draining neck rings on the Hurricanegers as well as many acquaintances of the Gouraigers to force them into a confrontation at Onibi New Town. After soundly beating down the Gouraigers, the meteor shower begins, inadvertently altering his cellular structure and causing him to mutate into a rampaging creature called "Manmaruba Berserker Form".

He was later revived in the final episode by the Evil Will to fight against the Hurricanegers and Gouraigers one last time. 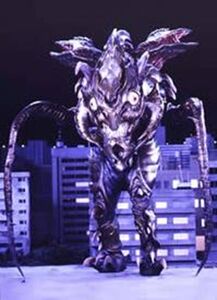