Imperial adviser (formally)
Leader of the Necromancers
God of Undeath

Find and use the Amulet of Kings overthrow Molag Bal.

Mannimarco, also known as the "King of Worms", is the most powerful necromancers in Tamriel and one of the few characters to appear in more than one Elder Scrolls game. He appears as one of the possible secondary antagonists in Daggerfall, the main antagonist of the Mages' Guild questline in Oblivion and the secondary antagonist in The Elder Scrolls Online. Canonically, after the events of that game he ascended to a form of godhood.

In Oblivion, an avatar of Mannimarco is the main antagonist of the Mages' Guild campaign of quests. In The Elder Scrolls Online, Mannimarco is featured as the secondary antagonist of the game. He has forged an alliance with the Tharn Family, rulers of Cyrodiil, to resurrect fallen imperial soldiers, but in the process, Mannimarco now rules Cyrodiil from behind the scenes. Mannimarco has also forged an alliance with the Daedric prince Molag Bal to help the Daedric prince merge Nirn with Molag Bal's realm of Coldharbour, although Mannimarco has secret plans of his own to betray Molag Bal and take his place as the next daedric prince of domination, enslavement and vampirism.

Galerion, the founder of the Mage's Guild. was a former member of a ancient High-Elf Order of Magi called the Psijic. Galerion left because he believed magic should be openly offered to all elves, men and beast-folk and not just a select few. In opposition to the policy Galerion not only left but founded the Mage's Guild as it is known throughout history as a school that offers training in the art of magic. But along with Galerion left his peer Mannimarco, who wished to ply the magic he had learned to enslave the world. Mannimarco was a powerful necromancer and without the authority of the Psijics to limit him became even stronger once he had left. Galerion considered Mannimarco to be a major threat against the Mage's Guild and encouraged his Guildsmen to oppose Mannimarco whenever possible, labeling him as their ultimate enemy. Mannimarco became a supplicant of the Daedric Prince Molag Bal and conspired with his master to open the first gates of Oblivion. Unfortunately for all, Mannimarco succeeded and the first gates to Oblivion were opened allowing Molag Bal and all Daedra following to entice, ensnare, collect and play with mortal souls through creative farces luring said mortals to the plane of Oblivion where they would receive no protection from the Gods.

Mannimarco's reward for his part in opening the first Oblivion Gate was a form of undead ascension. After the ascension Mannimarco had a cult of Necromancers founded in his honor which he used as his agents in the physical world. During the events of Daggerfall Mannimarco set in motion massive strife for his agents and Molag Bal's to take advantage of, however eventually earned more attention than he had liked which would eventually unravel his schemes. Durring the Warp in the West, Mannimarco split into two beings, an undead lich the same as before, and the God of Worms, a god of necromancy. In Oblivion the Lich Mannimarco finally turned his attention to the Mage's Guild who had been a thorn in his side for years and had just outlawed the practice of necromancy, flocking many rejected magi to his cult. The Guild suffers substantial damage from the Cult of the Black Worm from outright attacks, to spies being hidden within the ranks of the Guild, to members having their souls enslaved to Mannimarco's will and made to destroy their former allies. The Mage's Guild finally managed to launch an effective counterattack against the Cult of the Black Worm and Mannimarco himself. Mannimarco's dark legacy finally ended when he was defeated by the Hero of Kvatch and was killed for good. However, the God Mannimarco is still active. 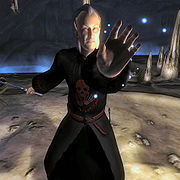 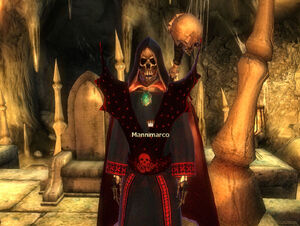 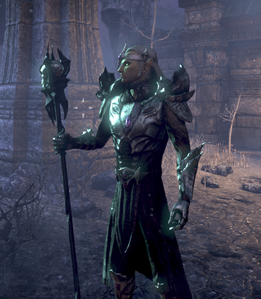 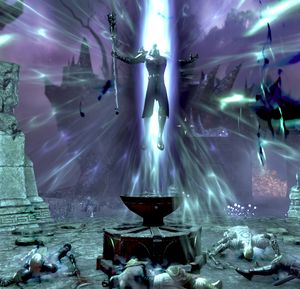 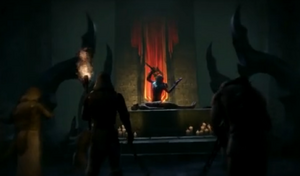