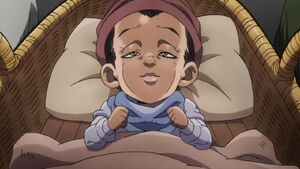 The Mannish Boy (as he is officially referred to) is a villain from JoJo's Bizarre Adventure: Stardust Crusaders.

The Mannish Boy is a 11 months old baby, who controls the Death 13 stand, which attacks people on their dreams. He is found near a well by a woman, who takes him near Jotaro and his group, apparently subconsciously guided by the baby. He first attacks Kakyoin while he sleeps, as well as a dog. Kakyoin finds himself on a ferris wheel in an amusement park along with the dog, where Death 13 attacks him and kills the dog, after which Kakyoin is awakened by Polnareff. Upon awakening, Kakyoin forgets about the dream, only remembering a baby cry.

Kakyoin leaves the hotel the group stayed, after which he and Polnareff see a killed dog, just like the one in the dream. The group rent a airplane to cross the Arabian Desert, but they are forced to take the baby with them, which has a high fever. Inside the airplane, both Polnareff and Kakyoin fall asleep, so they are immediately transported inside Death 13's nightmare. Death 13 attacks the two, who are unable to call their own stands, and when he is about to kill Polnareff he is awakened by Joseph, who tells him to change the baby's diaper. Kakyoin, still trapped in the nightmare, is attacked by Death 13, but he starts debating himself, causing Joseph to lose control over the plane, which plummets down. During their conversation, Kakyoin finds out the baby is the stand user, but he is trapped by Death 13, so he draws his pocket knife and stabs his own arm in an attempt to wake up, which fails. As the plane crashes on a palm tree, Kakyoin wakes up, disoriented.

While the group mounts a camp for the night, Kakyoin notices his arm is bleeding. He sees the word "BABY STAND" written on his wounds, and starts getting suspicious of the baby. He he looks at him, the baby turns his head away, so Kakyoin grabs the baby, but Joseph stops him. A scorpion gets near the baby, but he uses the nails on his diaper to kill it, which Kakyoin sees. Kakyoin attempts to alert the group about the baby, but he is knocked down by Polnareff before attempting to hurt the baby, as they believed Kakyoin was hallucinating.

The group goes to sleep, so they are all transported into Death 13's nightmare. He starts messing around with them, even creating a fake Star Platinum when Jotaro attempts to call his stand. Just then Death 13 is attacked by Hierophan Green, Kakyoin's stand. Kakyoin shows up in the dream, revealing he kept his stand activated before fainting, and as such he was able to call it inside the dream. He attempts to strangle Death 13, who uses the clouds to grab his scythe and attack itself an an attempt to strike Hierophant Green, revealing that it has no body. However, Hierophant Green unravels itself and enters Death 13's head through it's ear, who is left defenseless.

When the group wakes up, they see Kakyoin, apparently recovered, taking care of the baby. Still remembering the dream, Kakyoin threatens the baby, telling him to return to his mother and to never get near them again, after which he gets the baby's droppings and mix it on his food, which Joseph forcefully feeds him.

Whenever someone sleeps near the baby, they are immediately transported into Death 13's world. Death 13 has complete control over everything inside the dream, and as such it's victims are left defenseless. If the victim somehow wakes up, it will forget completely about the nightmare. Since Death 13 keeps the victim's spirit on the same state as when they go to sleep, stand users are unable to call their stands inside the dream, unless they keep it activated before sleeping, since stands are manifestation of one's spiritual power.

Death 13 appears as a Grim Reaper-like figure wearing a clown mask and holding a huge scythe. Beneath his cloak is completely hollow, as Death 13 is composed of only a head and floating arms.

Retrieved from "https://villains.fandom.com/wiki/Mannish_Boy?oldid=3722254"
Community content is available under CC-BY-SA unless otherwise noted.