King of the pit lords and general of the Burning Legion

Lead the Legion to victory.

During the Burning Legion’s first invasion of Azeroth, Mannoroth unleashed regiments of doomguards and slaughtered countless Kaldorei defenders. He was eventually defeated by Cenarius and thrown back into the Twisted Nether after the collapse of the Well of Eternity. Despite this, Mannoroth found great pleasure in all the destruction and carnage he had brought.

In order to pave the way for the Legion’s return to Azeroth, Kil'jaeden sent Mannoroth to the orc homeworld of Draenor. Twelve orc chieftains drank the pit lord’s blood and were overcome by terrible bloodlust, the first of them being Grom Hellscream of the Warsong Clan. The corruption soon spread all throughout the orc clans and eventually began attacking Azeroth’s human kingdoms. They were meant to be the harbingers of the Burning Legion, but they failed, in turn meaning Mannoroth had failed. He believed that the orcs were “his by right” and swore that he would punish the greenskins.

Mannoroth’s desire for vengeance was ignored by Kil’Jaeden and he created a new method of return for the Burning Legion, the Lich King and the Undead Scourge. They succeeded greatly where the Horde had failed and eventually the lich, Kel'Thuzad, summoned Archimonde, who was followed by Mannoroth, eager for vengeance against the orcs and the night elves. While he was leading the Legion’s assault on Azeroth, the dreadlord, Tichondrius, gloated that the Scourge had succeeded where the Horde had failed. Mannoroth was further infuriated when he found out that the orcs had fled to Kalimdor. He and Tichondrius followed them after Archimonde reminded them that the orcs could still be of use to the Legion.

When the two arrived in Kalimdor, Mannoroth felt the presence of Cenarius and was concerned that the demigod could interfere with their plans. However Tichondrius suggested that the Warsong Clan of orcs could be used to destroy Cenarius since they had incurred his anger. Mannoroth went with the dreadlord’s suggestion and spilled his blood into a fountain, so that the orcs would find it and drink from it. The Warsong’s witch doctors sensed the fountain’s power and the orcs eventually found it, but the witch doctors sensed its demonic powers. They warned Grom Hellscream (the clan’s leader) not to meddle with it, but he and his warriors ignored their warnings and drank the cursed waters, becoming corrupted. With the Legion’s demonic power fueling them, the Warsong Clan proved more than a match for Cenarius. With the demigod now dead, Mannoroth appeared to take control of Grom as the Burning Legion’s invasion of Kalimdor began. He devised a plan to take out Thrall since he was what kept the orcs a formidable force, but Thrall and his new ally, Jaina Proudmoore, managed to find Grom and free him of the demonic influence.

After Grom was freed, he and Thrall were lured by Mannoroth to the craters created by the rain of infernals. He sought to kill the war chief and re-enslave Hellscream to his will. When they confronted him, Thrall poured all his strength and hatred for Mannoroth into one mighty strike with Doomhammer. But the pit lord survived, applauding his efforts, with only slight scarring on his wing. He used a powerful

charge to knock Thrall against a cliff, leaving him out cold. Mannoroth confronted Grom and reminded him that he owned the orc body and soul, gloating that the blood curse would never be broken. The orc was left with the choice of succumbing to the demonic corruption or saving Thrall and his entire race. Refusing to accept that the Horde would be cursed forever, Grom managed to get through Mannoroth’s defenses to drive his axe into the pit lord’s chest. As Mannoroth died at the hands of possibly his

greatest minion - a fittingly ironic fate - demonic fires erupted from him, mortally wounding Grom. Now with the pit lord gone, the blood curse on the orcs was gone as well. Marronoth’s body was put on display in Orgrimmar, while his double-blade weapon remained snapped in half and locked in time in Ashenvale.

Over a decade later, the former Warchief of the Horde, Garrosh Hellscream, was put him trial for his crimes against Azeroth. Shortly before the trial ended, he was spirited to freedom by a rogue Bronze Dragon named Kairozdormu, taken over thirty years into the past to Draenor. Here, Garrosh was able to warn an alternate version of his father, Grom, of the terrible future he would lead the Orcs to should he accept Mannoroth's gift. With the aid of the Blackrock Clan, Grom and Garrosh were able to build weapons of war under in preparation for the day that Gul'dan would offer the demon blood to them.

Atop the highest mountain in the Tanaan Jungle, Gul'dan awaited the Orcs so he could give them the blood of Mannoroth. Grom, as was in the main timeline, was the first to approach him. This time, however, when he was given a wooden cup filled with Mannoroth's blood, he poured it back into the cauldron. It was then that Mannoroth appeared to kill Grom in an effort to make an example of him before the rest of the Orcs. Neither he nor Gul'dan were prepared for the Blackrock war machines, and a fierce battle ensued. In the end, Mannoroth was struck down once more in an all too familiar fashion. This time, however, Grom was rescued from the fiery eruption from Mannoroth's demise by Garrosh.

Several months followed, and the Iron Horde began to dwindle. Gul'dan had successfully manipulated Grom's second-in-command, Kilrogg Deadeye, to drink the demon blood from the mountain and the two established a new Fel Iron Horde. Grom, however, denied the gift and was taken prisoner. Atop the same mountain where Mannoroth died - now called the Throne of Kil'jaeden - Gul'dan and Grom conversed near the fallen pit lord's skull. Gul'dan later assembled the remains of Mannoroth and took them to his capital of Hellfire Citadel to be reanimated by his Warlocks. The ritual was a success and Mannoroth was brought back from the dead, only to be slain once more by invading adventurers.

Given the nature of the Legion and the Twisting Nether, it is still unclear if this was an alternate Mannoroth or the same Mannoroth who was defeated in Ashenvale.

Mannoroth is simple-minded with no desire to change his place in life and craves blood and carnage more than everything else. He seeks to wage unending war against the mortal races and is quite willing to be an enforcer for Archimonde and the Burning Legion. Mannoroth is an extremely efficient weapon of destruction and was always at the forefront of the Legion’s invasions. Even the bloodlust of the orcs is a minor compulsion compared to that of Mannoroth's. In the absence of mortals for him to slay, he turns on his own demonic brethren, slaying them with unending satisfaction. He prefers the kill to the chase and would slay any mortals that stumble across him. Mannoroth likes things messy, often getting in extra strikes to make sure his foe is dead, and likes to wade into concentrated areas of enemies.

Mannoroth has great strength and durability, able to take powerful attacks with only minor damage. He has great demonic power and wields a double-bladed sword weapon in battle that most pit lords wield. Mannoroth's blood also carries powerful demonic energies that can corrupt those who consume it. Uniquely among Warcraft villains, Mannoroth was deadly even after his death thanks to his postmortem explosion, which would kill anyone who stood in its way. 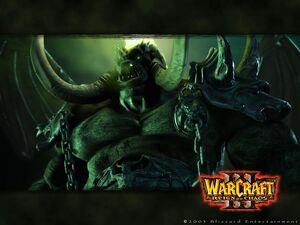 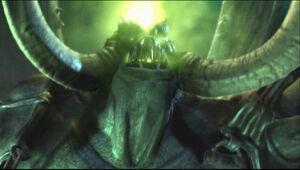 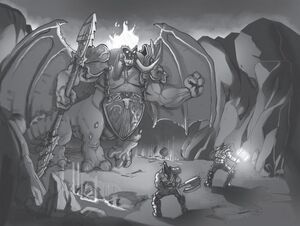 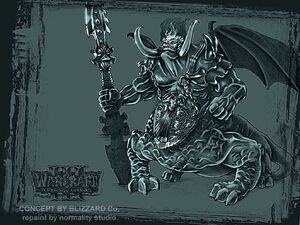 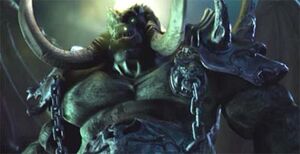 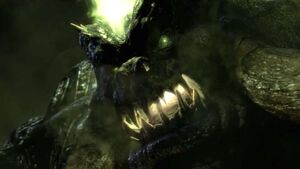 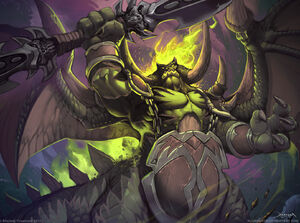