Amnesia: A Machine for Pigs

Manpigs are the main antagonists of Amnesia: A Machine for Pigs, being a hostile race of human-pig hybrids created by The Machine.

As aforementioned, Manpigs are a hybrid of human and pigs created and controlled by The Machine, specifically its core The Engineer. They patrol the hallways of the facility and relentlessly chase the player once they spot him. A human subject is infused with two substances: Vitae and Orgone Monad Disperal fluid. These two substances are combined to facilitate the merger of human and pig cells after the best genetic traits from both have been combined. Since the genetic mixture is sensitive to light, Schuman lamps are shone upon the experimental subject to reanimate it.

Manpigs only answer to the Machine, as evidenced when it the Machine orders them to slaughter the population of London, or to kill Mandus which they obeys without hesitation. They also have an intellect comparable to that of a small child, as they are seen playing with toys.

The earlier version of the Manpigs called Failed Experiments was a complete failure and later they escaped into the Sewers. The later version of the Manpigs has been tested with so much Compound X that it has become very unstable, causing the creature to teleport in and out of existence, which has driven it insane. Due to their madness these creatures are locked up in a tower.

Wretches are the most common type of Manpigs, being small, hunched-over, and weak enemies, depicted much like the Servant Grunts from The Dark Descent. Their behavior, notably, is almost child-like and playful, leading most to believe that they were the orphaned children Oswald Mandus used as slaves.

The engineers are much like the foot soldiers of the Manpig army, being bigger less sufficient Manpigs donning engineer aprons. They every much resemble Brutes from The Dark Descent.

The Teslas are the bigger and rarest ranks of the Manpigs, being towering wretch-like creatures decorated in electrical lights. They are blasted away from all reality thanks to large doses of Compound X and are greatly effected by temperature change. Due to their extreme exposure to Compound X, they flicker in and out of, which in turn causes them to go insane.

Failed Experiments are the earlier versions of the Tesla. These versions have become overheated and, as a result, their vitae has splintered, causing them to be invisible to the naked eye. They are encountered in both the Sewers and the Bilge, albeit in a different form. 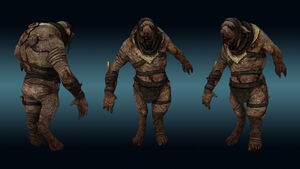 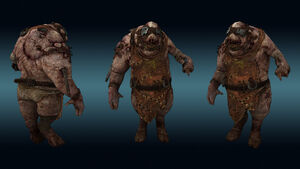 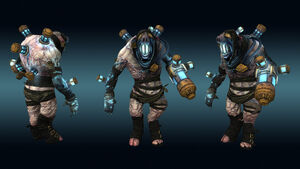 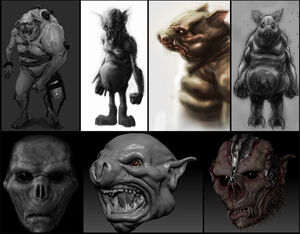 Early designs
Add a photo to this gallery

Retrieved from "https://villains.fandom.com/wiki/Manpigs?oldid=4027485"
Community content is available under CC-BY-SA unless otherwise noted.