Get the twenty thousand dollars from Woody.

Manslaughter McGill is a minor antagonist in Brickleberry, only appearing in the episode "Miss National Park". He is an Irish murderer who is out to kill Woody because of the twenty thousand dollars he owes him due to losing a sports bet on Quidditch.

In "Miss National Park", Woody got a rock thrown through the window with a message for him, telling him that he was a dead man. Woody knew that someone was out to get him so he told Steve to put on a mustache and go out and start his car, causing him to get blown up.

That night, Woody snuck around a dark alley to try and hide but then all of a sudden, he was violently slammed and pinned against a wall by an evil Irishman named Manslaughter McGill, who demanded the $20,000 he owed him for losing a bet on a game of Quidditch. Manslaughter McGill threatened Woody to give him the money or he'd heat up a glass rod to a thousand degrees and shove it up his-Before he could finish, he got a phone call from his wife, who had complete and total dominance over him. She demanded that he clean up their pet dog, Scooter's pee off the carpet and Manslaughter McGill acted all nice and sweet around her, proving to be an absolute pussy when his wife came into the picture. He went back to threatening Woody but before he could tell him what part of his body he would shove the glass rod up, his wife called him again and demanded he give her some fluffy truffles from The Cheesecake Factory. Manslaughter McGill went back to threatening Woody but Woody made a bargain with him, saying that he'd do double or nothing, betting on Ethel Anderson to win the Miss National Park beauty competition. Manslaughter McGill accepted and said that when he failed, he would heat a glass rod up with a blowtorch and shove it straight up his-Only to get cut off again by another phone call, this time from Woody, pretending to be his wife, asking him to leave Woody alone. Naturally, Manslaughter McGill didn't buy the shit.

On the night of the beauty pageant, Manslaughter McGill sat in the audience and when he saw Woody in the back, he demonstrated on the person sitting next to him what he was going to do to him when he lost. He cracked the guy's neck and murdered him, indicating he would do the same to Woody.

Ethel lost the competition to Connie, which meant that now Manslaughter was going to take that aforementioned heated glass rod and shove it up Woody's fingle fangle, (which means penis) but first, he had to go home with the groceries and see his abusive wife, who turned out to be the B-Plot villain, Tammy Jane. When Manslaughter got home, Tammy Jane forced him to join a three way with Steve and Denzel and then later, Dr. Kuzniak.

When the time came to shove the heated glass rod up Woody's fingle fangle, Manslaughter McGill just wasn't into it. Whie duct taped to a couple of trashcans, Woody asked him what the problem was and Manslaughter said that there was just so much going on between him and his wife that he couldn't properly torture him. Woody made a deal with Manslaughter. If he set him free from the fingle fangle torture, and didn't need him to pay off his debt, he'd help him kill his wife. Right after this, Manslaughter and Woody were shown buying the corpse of Tammy Jane together and with that, they called it even. 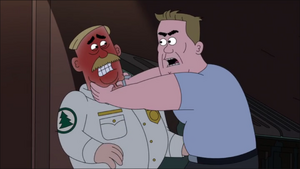 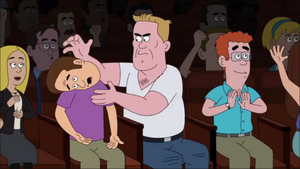 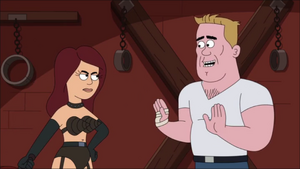 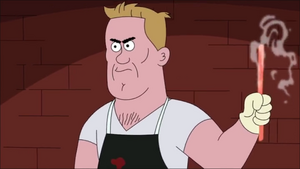 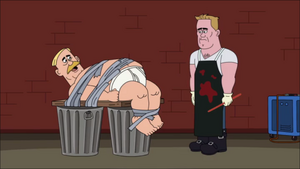 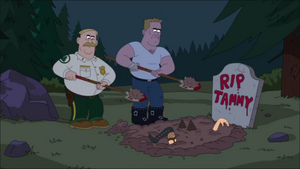