Mantaraymon is a minor antagonist in both Digimon Tamers, Battle of Adventurers, Digimon Fusion, and the reboot of Digimon Adventure. They are the soldiers of Neptunemon in Digimon Fusion that serve as fleets. Mantaraymon are Armor Level Digimon that resemble giant blue manta rays that are equipped with armor and cannons.

Mantaray was a minion of Mephistomon. After Scorpiomon and Divermon were defeated, a Mantaraymon swooped in from the air and manage to capture Minami. When Takato, Kai, Guilmon and Seasarmon were attempted to rescue Minami, they were stopped by both the very same Mantaraymon, and a Depthmon. They put up a good fight but when Guilmon Digivolved into Growlmon they were easily defeated.

One Mantaraymon carries Neptunemon around. Some Mantaraymon were killed when the Fusion Fighters hijacked one of them to wipe them out before Octomon killed the hijacked Mantaraymon. The last one that Neptunmon rode on was unknown what happened after Neptunemon's death.

Mantaraymon has been seen attacking the underwater city of MarineAngemon. When Taichi, Sora, Takeru, Hikari and their Digimon partners arrived in the underwater city of MarineAngemon, Gatomon went to battle against them and defeated them. But later, as the city was on the move, they attacked it again with Scorpiomon. The Four Chosen Ones went with their Digimon partners to battle them all, and they succeeded in destroying all the Mantaraymon attacking the city as well as Scorpiomon as well.

This Sea Animal Digimon armor-digivolved through the power of the "Digi-Egg of Reliability". Based on its appearance, it looks like an offensive speed-type Digimon, but it is actually the opposite; it has a calm and quiet disposition that elegantly swims somewhere in the vast Net Ocean.

However, it is impossible to capture on radar because of its unique figure and is called the "Stealth of the Deep", and it is often used for reconnaissance or treated as an underwater bomber among those who definitely abuse Mantaraymon. For that reason, it is said to be overfished and threatened with extinction. Also, Digimon that assault Mantaraymon are counterattacked with an intense blow from the "Stun Needle" on its tail. 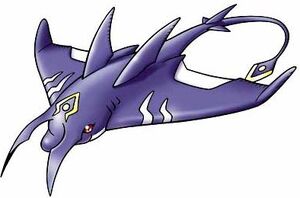 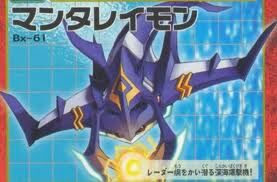 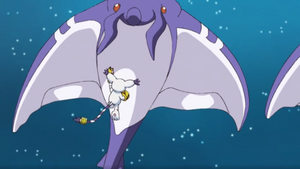 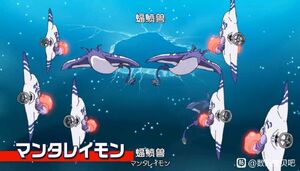 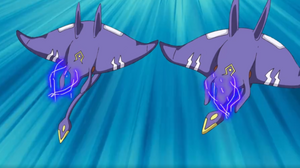 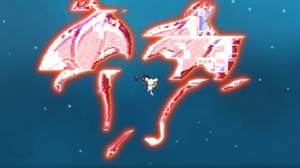 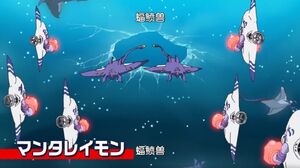 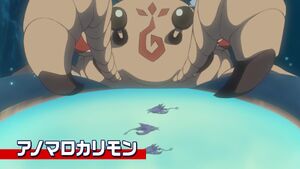