Carrying out missions for Shocker.

Monster
Mantis Man is a Shocker Kaijin with the characteristics of a mantis and an antagonist in episode 5 of the original 1971 Kamen Rider series.

He was voiced by Mahito Tsujimura in episode 5, who also voiced Mezalord in Akumaizer 3, and by Susumu Mizushima in episode 13.

Seismologist Chikako Amemiya was abducted at the command of the Great Leader of Shocker in order to make the "earthquake operation" successful. Shocker manipulated her to lure Takeshi Hongo and attempted to kill once she was of no more use. This failed and Amemiya was taken away, but Mantis Man was dispatched again under the strict order of the Great Leader of Shocker. He then manipulated the protected Amemiya to stun Hongo and bringing her back, the earthquake operation can be completed. However, the mantis man failed to interfere with Hongo who appeared in the recapture of Amemiya. Although he tried to activate the detonator, Hongo transformed into Kamen Rider and defeated Mantis Man with a Rider Kick, foiling the operation.

Mantis Man was reconstructed in the 13th episode.

In addition to fighting by waving a sickle-shaped left hand or kusarigama, he shoots darts that melt the hit person. 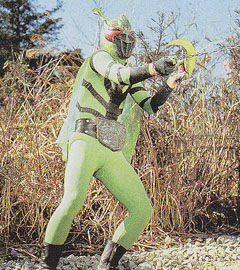 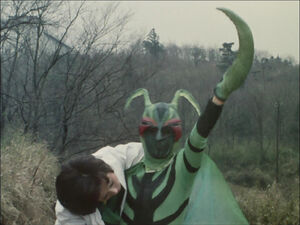 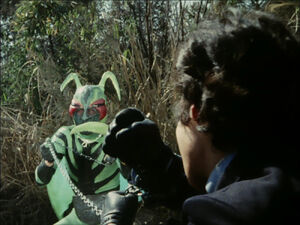 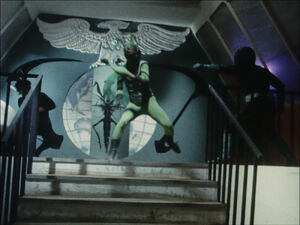 Retrieved from "https://villains.fandom.com/wiki/Mantis_Man?oldid=4188795"
Community content is available under CC-BY-SA unless otherwise noted.