El Gordo (The Fat One)

Leader of the Zaragoza Drug Cartel

Brainwash soldiers to aid in his smuggling (succeeded).

Start a war against other cartels to return home a hero (failed).

Manuel Roba is the main antagonist of the Call of Duty graphic novel Modern Warfare 2: Ghost, a prequel to the 2009 video game Call of Duty: Modern Warfare 2 and a posthumous antagonist in the said game. He was a drug lord who tortured and brainwashed multiple hostages and soldiers to smuggle terrorists and drugs for him, most notably Simon Riley and his team. Though he failed in brainwashing Riley to do his bidding, Roba succeeded in brainwashing Kevin Sparks, Vernon and Marcus Washington to aid him in trying to break Riley, but the three were killed by Simon.

Manuel Roba was born to unnamed parents, and they were later killed at a market by unnamed men. Roba would later become a drug dealer, and became the head of the Zaragoza Drug Cartel. Roba and his cartel became infamous in the world, possibly due to him capturing military soldiers and torturing them at a brainwashing facility in Coahuila, Mexico.

Roba captured Major Vernon after his team was sent to kill him, and had him brainwashed and sent back to the United States to assemble another team to go after him. Vernon returned with a team that consisted of Simon Riley, Kevin Sparks, Marcus Washington, Cumberland, and Sykes, and betrayed them to Roba. The drug lord decided to brainwash the team into helping him smuggle terrorists and drugs across other parts of the globe, and successfully managed to brainwash Sparks and Washington. Though Roba managed to break, Roba placed him in a coffin with Vernon's corpse, and secretly let Washington and Sparks escape from facility to the states.

Afterward, Roba moved to Chiapas within his summer house, and started a war between cartels so he could return home as a hero. However, Riley managed to survive and made it back home before getting revenge on Sparks and Washington for murdering his family, and tortured Roba's right-hand man Gilberto to find Manuel's location. Roba was shot in the head by Riley, and the latter burned his mansion and compound as he approached by General Shepherd to join Task Force 141. 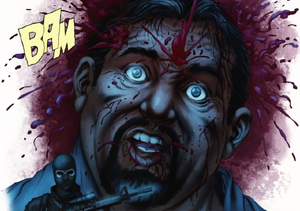 Roba's defeat as he was shot dead by Riley.