Father of the Abyss

Creator of the Abyss

Plunge the entire world into the Abyss.

Manus was once a regular man in search of the broken pendant. When he died, the people of Oolacile were convinced by a serpent (presumably Darkstalker Kaathe) into tampering with his grave and resurrected him. This enraged Manus's undead soul, causing his humanity to go out of control, turning him into a monster and creating the Abyss. He captured Princess Dusk of Oolacile, forcing the kingdom to surrender to the sorcerer. Manus consumed the entire kingdom with the Abyss, causing the residents to bloat into hideous monsters, driving them to complete insanity. Even the mighty Knight Artorias, one of Lord Gwyn's four knights of Anor Londo, was no match for the Abyss' power and was corrupted by Manus' influences to protect his wolf companion Sif.

In Oolacile, after defeating the Sanctuary Guardian and Knight Artorias, the Chosen Undead learns from the surviving residents and Hawkeye Gough about Manus lurking from below Oolacile in the pit of the Abyss. Sure enough, Manus indeed resides at the deepest pit of the Abyss, near the patch of soil from which he was buried. Manus drags the Chosen Undead down to the bottom to corrupt them just as he did to Artorias, but they manage to defeat him and put his undead humanity-draining body to rest.

Although Manus is long dead before the events of the Dark Souls trilogy, the Abyss he created remains as a threat in the world, still continuing to drive humanity from man. Many characters, such as the Four Kings and High Lord Wolnir, have fallen into the darkness it continues to casts. Sometime before the events in Dark Souls II, Manus' soul shattered, with several particles growing sentient and became separate lifeforms known as the Children of Dark, including Nashandra, Elana, Nadalia, and Alsanna. Manus' grave would become the Dark Chasm of Old, where the Darklurker resides.

Manus has a monkey-shaped body covered in black fur, with numerous antlers and horns sprouting from his head, some of which have red glowing eyes. In his right hand, he wields a large catalyst, which he can use to summon black magic and mash on the ground. His left arm is massive with a spike-covered palm, which he can extend to grab and slap the player from a distance. 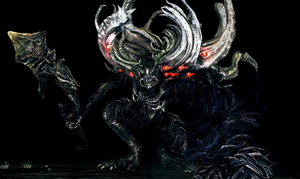 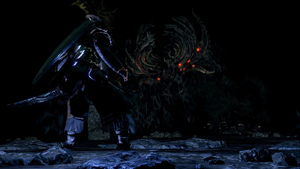 Manus emerging from the Abyss to battle the Chosen Undead. 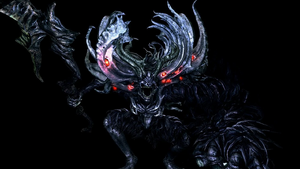 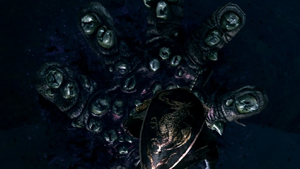 Manus' massive hand about to drag the Chosen Undead to Oolacile. 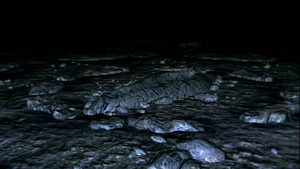 The grave that Manus was revived from. 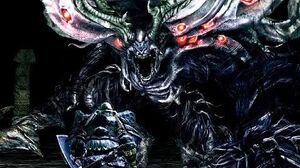 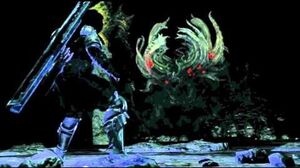