The void between universes

Impose rigid geometrical order on the whole universe to their liking (2,000 AD).

Conquer the Multiverse and bring Chaos to all realities (Marvel Comics).

The Many-Angled Ones are fictional extra-dimensional beings linked to the Cthulhu Mythos.

They first appeared in Grant Morrison's story Zenith, which appeared in the British comics anthology 2000 AD. In Zenith they are known as the Lloigor, a direct reference to creatures from the Cthulhu Mythos. However, they appear somewhat different from the Cthulhu Mythos entities. In the comic, the many-angled ones have a dastardly plan to impose rigid geometrical order on the whole universe, essentially reducing it to clockwork.

The many-angled ones exist in a space with more dimensions than our own; hence, they appear to be many angled. As a result, when they manifest in our universe they appear as disconnected floating body parts of some larger beast that is complete in the higher dimension (similar to how a three dimensional being would appear in flatland as its parts pass through the plane of that two-dimensional world).

In the Marvel Multiverse, the Many-Angled Ones are Eldritch-like entities that live outside the universes, in the space between the infinite number of realities and who appear to exist simultaneously in many planes at once. It's not clear what is their origin, though one theory is that just as demons were created by the nightmares of mortals, so were the Many-Angled Ones created by the nightmares of demons themselves. They are beings of chaos, destruction, corruption, and evil. Countless worlds and dimensions worship the Many-Angled Ones, have been conquered by them, or destroyed by these ancient beings.

In The Thanos Imperative, Shuma-Gorath is revealed to be a member of the Many-Angled Ones. Marvel later reveals in the Marvel Fact Files that the "Many-Angled Ones" are also known as the "Old Ones" and therefore Shuma-Gorath is the ruler of the Many-Angled Ones (being the "Master of the Old Ones" per the Marvel Handbook Horror 2005). Shuma-Gorath has been confirmed to have been in existence at least several hundred million years, as far back as the age of dinosaurs. Shuma-Gorath claims to have been there in the beginning, which if true would make him billions of years old. He has conquered hundreds of realities and in his own dimension is omnipotent, exists simultaneously in many planes though only a tiny fragment of his essence and power ever crosses over to another reality.

Shuma-Gorath is one of the lords of Chaos and is pure power, the form others see is simply his shell. From across dimensions he is able to transmutate whole planets. If Shuma-Gorath was to enter the prime Marvel reality (Earth-616), the pressure from his aura would destroy multiple galaxies. His magical powers are nearly omnipotent and he is able to focus his powers into a ball of energy which can destroy a universe.

In the Marvel Comics cosmic crossover event "Realm of Kings", written by Dan Abnett and Andy Lanning, Quasar travels through a time/space rift to an alternate earth with multiple Lovecraftian elements being part of the everyday reality of that world. There Quasar meets the Revengers, that world's counterparts to the Avengers, who received their powers from the Many-Angled Ones in exchange for the adoration of the heroes.

That world's Iron Man states that the Many-Angled Ones have outgrown their reality and need a new place to feed and be worshiped. They intend for Quasar to show them the way to his Earth. The Many-Angled Ones are opposed on this Earth by the heroes who believe in pure science, such as the Vision. They later become the antagonists of The Thanos Imperative miniseries, when the Many-Angled Ones and their servants in the Cancerverse attempt to invade the prime reality through the Fault (a newly created tear in the universe which opens the door from other realities). An alliance consisting of the major interstellar powers, the cosmic aspects, and various superheroes battles the invaders at the breach. It's a battle which they are losing, until the of the Galaxy Guardians of the Galaxy bring Earth-616's Lady Death to the Cancerverse, weakening the Many-Angled Ones and ending the invasion.

More recently, they have appeared in books by British authors or comics and video games from British comics writers who have worked for 2000 AD.

The beings were referenced in the DC comic book Hitman, by Garth Ennis, which briefly featured demons called "The Multi-Angled Ones" who end up killing most of Section 8.

In the 2010 remake of the video game Splatterhouse, scripted by 2000 AD writer Gordon Rennie, the Mask of Terror refers to a group of Cosmic Horrors as the Many Angled Ones. 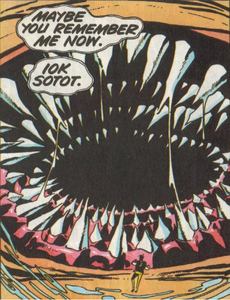 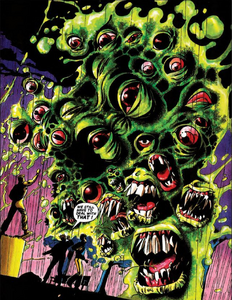 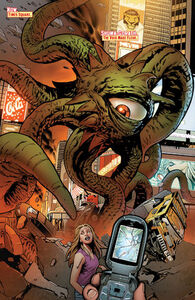 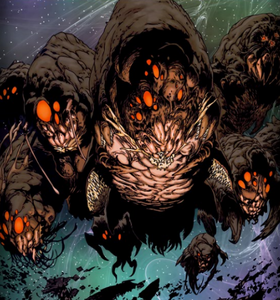 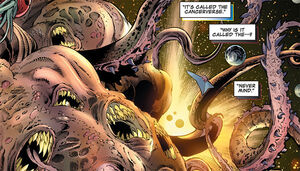 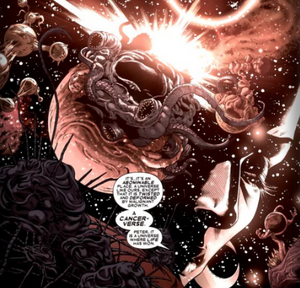 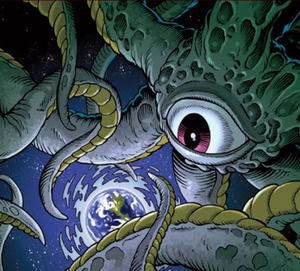 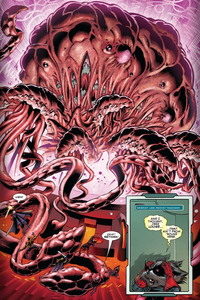 Many-Angled One (Guardians of the Galaxy Vol 2 1) 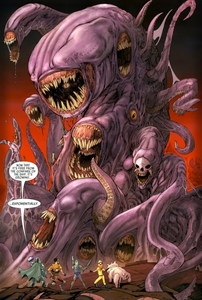 Many-Angled One (Realm of Kings, Inhumans 5)
Add a photo to this gallery

Retrieved from "https://villains.fandom.com/wiki/Many-Angled_Ones?oldid=3890684"
Community content is available under CC-BY-SA unless otherwise noted.