The Marauders are a species of recurring demons serving as mini-bosses throughout Doom Eternal.

All Marauders are voiced by Edward Bosco, who also voiced the Icon of Sin, Gargos and Kan-Ra in Killer Instinct, The Ghoulfather in Yo-kai Watch 3, Jagi in Fist of the North Star, Devo in Jojo's Bizarre Adventure, and Líf in Fire Emblem Heroes.

The Marauders were once members of the Night Sentinels, a group of warriors who fought against the demonic hordes invading Argent D'Nur, swearing loyalty to King Novik and through an alliance with the Maykrs and their ruler, Khan Maykr. However, as Khan Maykr's devious actions against other civilizations came to life, a split between the alliances between two groups of the Night Sentinels emerged, with one group supporting Khan Maykr's actions while another group chose to betray Khan Maykr and fight for the general good of everyone. This divide between the two groups eventually caused a civil war of sorts to break out between them, with all Night Sentinels that chose to disobey the Maykrs (Minus Doomguy) were wiped out. However, the loyalist side lost men as well, and once dead, these Night Sentinels were revived as Marauders. Now, they hunt down Doomguy and serve has soldiers in the armies of Hell.

The first Marauder the player fights in the game serves as the second boss, emerging from a portal inside the ARC Complex when the player goes to fetch the Crucible and save Samuel Hayden. Taunting Doomguy of his supposed status as a "usurper" and a "false idol", this Marauder begins the assault desiring to destroy Doomguy to "open his eyes".

All Marauders fight in the same way. Fighting uniquely compare to other demons, the Marauder requires more strategy to beat. With a large shield in front of it, the Marauder is only able to be successfully be stunned after being hit mid-lunge (marked by its eyes flashing green and a sound cue), and only then can the beast be attacked. However, the demon will usually block some attacks (such as ones done with a Chainsaw, the BFG 9000, or the Crucible). For actual attacks, the Marauders can fire a beam of light from their axe at the player when far enough, fire at them point-blank with their shotgun when close enough, lunge at the player with its attack when between the two points, and summon a demonic wolf once he blocks an attack, this summon running towards and biting Doomguy. The trick to fighting it is to stay in the right distance, keep focus on its attacks for the opening of damage, and not get too distracted by it to open yourself up for attacks from other demons.

After the initial fight, the Marauders appear several more times in the game, acting as minibosses.

In the Battlemode for Doom Eternal, the Marauder appears as a playable character. Serving as a "glass-cannon", the Marauder switches health for flexibility and power. Although lacking his shield, the Marauder can still use his axe, shotgun, and wolf to attack players. The Marauder's end of round upgrades are Best Friend (Which boosts your wolf's health and reduces the damage you take for three seconds after a successful attack) and Bury the Hatchet (Causing direct hits from your axe strikes to boost your speed for three seconds).

A tall, hulking figure, the Marauders have white skin, large bull-like horns, red eyes, and a fanged mouth. They mainly wear green Armor, which covers their mouth, part of their muscular chest, arms, legs, and feet. They are equipped with a Crucible-like axe (With a bony hilt and a red blade of energy) and a small shotgun.

The Marauders before and after their demonic rebirth.

One of the many collectable toys the player can collect in Doom Eternal, with this one being for the Marauder.

The first Marauder the player fights emerging from a portal. 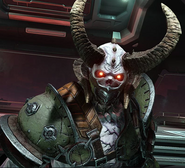 Retrieved from "https://villains.fandom.com/wiki/Marauders_(Doom)?oldid=4113345"
Community content is available under CC-BY-SA unless otherwise noted.