Escape from Marquis Adoet de Fabre grasp and get revenge on him (succeeded).

Marchosias is a demon and Prince of Hell who serves as a supporting antagonist in B.P.R.D.: The Universal Machine.

Marchosias was once an angel, who served as the ruler of the 7th Throne of Heaven, who rebelled alongside Satan against God, and was cast down to the pit, where he became a Prince of Hell. At some point he would also become the lover Iblifika, a Princess of Hell.

In the 1800's, he and Iblifika were summoned by Marquis Adoet de Fabre, an occultist and collector of the supernatural, who enslaved both of them as his servants using one of the rings of King Solomon. Marchosias was transfigured into an dwarf, wearing a crown of wood, presumably mocking his status as a Prince of demons. Both demons would become subjects of cruelty at the hands of the Marquis.

By 2006, Marchosias and Iblifika would finally get their revenge on de Fabre, when they were released by B.P.R.D.-agent Kate Corrgian, who was double-crossed by the Marquis within a deal over an occult book. She did this cutting the ring of Solomon from de Fabre's finger. The demons turned to their back to their demonic form and started to take their revenge on the Marquis, first by burning his entire collection of supernatural treasures to the ground and then dragging him back to Hell for torture. Marchosias also saved Kate Corrgian by throwing her into an empty cabined, away from the fire. 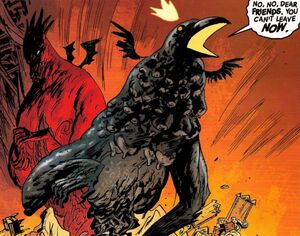