Marco, going under the alias Señor Bob, is a supporting antagonist of Quentin Tarantino's The Hateful Eight. He is a member of Jody's gang, where he goes under the nickname Marco the Mexican, and traveled with him to save his sister Daisy Domergue. There is a bounty worth twelve-thousand dollars on his head.

He was portrayed by Demián Bichir, who also portrayed Marcos Mendez in Machete Kills and Walter Simmons in Godzilla vs. Kong.

Arrival at the cottage

He, alongside Jody, Pete Hicox and Grouch Douglas arrive at Minnie's Haberdashery, knowing that John Ruth, the bounty hunter who captured Daisy, will pass there on his way to Red Rock. They kill everyone inside except General Sanford Smithers of whom they think he would add up to their cover. They persuade Smithers to keep quiet, then clean up the cottage. As Marco has stabbed Sweet Dave, a regular, in his chair they hide the bloodstain with a blanket. They then dump the bodies in the well and wait for John Ruth to arrive with Daisy.

When Ruth and Daisy, accompanied by Major Marquis Warren, O.B. Johnson and Chris Mannix arrive at the cottage, they are greeted by Marco, who acts as the caretaker of the Haberdashery, telling them that he runs the place because the owner left to visit his mother. He is told to care for the horses, but tells the guests to help him. Warren, Mannix and O.B. help him to bring the horses into the stable.

After O.B. and Mannix go back to the cottage to get warm, Warren, who has visited the haberdashery multiple times before, uses the opportunity to talk to Marco, who has introduced himself as Bob. He asks Marco whether Sweet Dave is inside, but Marco replies that Sweet Dave and Minnie left to visit her mother on North Side and left him in charge.

Warren chuckles at that, telling him that that doesn't sound Minnie. Marco acts insulted, asking Warren whether he is calling him a liar. Warren tells him that Minnie never struck him like a sentimental type and that Sweet Dave would never lift his fat ass out of his favourite chair to travel to the Northern Side. Marco states that this sounds like Warren is calling him a liar. Warren knowingly smiles and responds that while it may sound that way, he hasn't done it yet. Warren then tries to goad Marco into making a mistake, asking him whether they both would share a pipe of Minnie's quill tobacco but Marco correctly responds that Minnie doesn't smoke pipe but rolls her own. He also names the right brand of tobacco, telling Warren that he believes that Warren already knew that. Warren responds that he did, but wanted to know if 'Bob' knew. They then leave the stables to warm themselves up in the cottage.

When entering the cottage, Warren reminds Marco of Minnie's 'no hat's indoors policy', but Marco responds that he has a laissez faire attitude about hats.

When Warren, fed up by general Smithers' racist remarks, goads Smithers into attacking him so he can kill him in self-defense, Marco plays Silent Night on the piano. During the distraction of Smithers' death, Douglas poisons the coffee while no one is watching. This leads to the death of Ruth and O.B. and Warren rounds up the surviving men at the cottage's wall to find out who poisoned the coffee.

After revealing that Mannix couldn't have poisoned the coffee, because he almost drank the coffee himself, Warren begins to expose Marco as a fraud. He tells the people that the stew was what got him thinking in the first place, as Bob claimed that Minnie left a week ago. Knowing the taste of fresh stew, he wonders how Minnie could have cooked the stew this morning when she was already gone for a week. He then talks about the chair in which he sat during his conversation with the general, stating that he couldn't believe his luck, because he never saw the chair empty, Sweet Dave always sat in it. He goes as far as claiming that if Sweet Dave would travel, he would take the chair with him. He removes the blankets on the chair to expose dried blood on it. Marco then asks Warren if he is now actually accusing him of murder. Warren responds that he is not necessarily accusing Marco, but that someone in the cottage is not who he claims to be. When Marco tells Warren that he couldn't have poisoned the coffee as he was playing the piano when that happened, Warren replies that his theory is that Marco is working with the man who poisoned the coffee. Marco then calls Warren an "imaginative n*gger" and asks him whether he will murder him based on a theory or if he has actual proof.

Warren responds by saying that it is a little more then just a theory and tells Marco about a sign that hung in the haberdashery before the time Marco claims to have started working there. This sign said "No dogs or Mexicans". Revealing that Minnie despised Mexicans and therefore would have never trusted her haberdashery to one, Warren then tells Marco that he now is calling him a liar and shoots him twice in the chest and then in the head, causing it to explode with an eruption of brain and blood.

Marco greets the guests arriving at the harberdashery

Marco with the other suspects 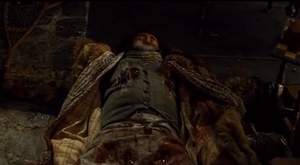