Gain control of the Gem of Amara so he can kill as many children as he wants in the day time (failed).

Marcus was a vampire and a torturer for hire, as well as the main antagonist of the Angel episode, "In the Dark".

He was portrayed by Kevin West.

Not too much is known about Marcus' past, but it is implied that he's lived for centuries since he apparently inspired some of the "classic" methods of torture. He is also a pedophile and child murderer. His victims he has tortured in the past included humans (such as politicians) and other demons.

During his time in Los Angeles, Spike hires Marcus to torture Angel for answers as the where he kept The Gem of Amara. Marcus was interested in this given the ring  granted any vampire who wore it absolute immortality, including immunity to sunlight and being staked in the heart. He lies to Spike, telling him that he is not interested in the ring, so that Spike would hire him to torture Angel for answers, and he could steal the ring for himself once they got it.

Marcus captures Angel during a trap laid by Spike and imprisons him in a warehouse. He is astonished by Angel's lack of external wounds, and is somehow able to sense that Angel has a soul and has known love.  Wanting to not only find the ring, but also find out what Angel truly wants in life, he subjects Angel to hot pokers, as well as sunlight in order to break his will-all while listening to Mozart on his record player. Angel officially breaks and admits he dose not want the Gem for himself, and that he wanted forgiveness for the evil he had done as Angelus. However, Angel grabs a stake with his feet and attempts to stab Marcus with it, only to be stopped by Spike. In rage for this act, Marcus punches Angel in the face.

Marcus manages to steal the Gem while Spike is distracted by the arrival of Cordelia Chase, Allen Francis Doyle and Oz, who had agreed to relinquish the ring to Spike in exchange for Angel's freedom. Marcus, now immune to sunlight due to the ring's power, arrives on a pier where some girl scouts are buying ice cream. Angel, knowing he has a thing for children, has his friends drive over to that pier. Before Marcus can harm the children in any way, Angel and his gang run him over. Oz shoots him with an arrow, but to no avail, and he overpowers Doyle in a fight. Therefore Angel charges at him while burning in the sunlight, throwing them both into the ocean. They engage in a fight underneath the pier (shielded from the sunlight), and Angel impales him on a thick support column and takes the ring off of his finger, killing him. 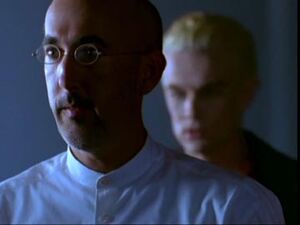