Raise Mercury to be a killer like him. (succeeded)

Marcus Black is a posthumous antagonist from the American animated webseries RWBY. He was the abusive father of Mercury Black who molded his son into a vicious killer like himself.

From what was seen of his corpse, Marcus had white hair and wore a red shirt, black pants and green boots.

As a professional assassin, Marcus was likely cold and ruthless, willing to kill anyone without remorse if the pay's good. According to Mercury, Marcus was a cruel and wrathful father who believed that tormenting and beating his son was the best way to "train" him and mold him into a killer like himself. He also believed in pure physical strength above all else and saw other abilities such as Semblances as "crutches" that made the users weak. In addition, Marcus was dishonest, as when he promised to restore his son's Semblance if he got stronger, but never did. He was also claimed by Mercury to be an alcoholic person, and seemingly cared more about drinking than he did the safety or well-being of his own child.

Marcus was a skilled assassin with great combat prowess who taught the extremely skilled Mercury everything he knew. In the final fight between him and his son, Marcus managed to severely injure Mercury's legs beyond repair before being killed by him. Marcus also had a Semblance that could strip another person of their own Semblance. Though he claimed that he could give it back if he wanted, it's unknown if he actually could or was lying about it.

While little is known about Marcus' past, it is known that he was a successful and dedicated assassin hired to kill targets. He was very skilled in what he did and earned a reputation for his skills.

He later had a child named Mercury. Marcus was incredibly abusive and violent towards his son, which his alcoholism did not help. Mercury grew up being "trained" to be an assassin like his father, constantly forced to defend himself from his father's frequent beatings and attacks. Marcus trained Mercury on how to fight, planning to mold him into a killer like himself. When Mercury unlocked his Semblance (presumably in his teenage years), Marcus saw it as a crutch that would have made Mercury weak, so he used his own Semblance to steal it away. He told Mercury that he would give it back to him when he became strong, so Mercury trained harder to get there. However, Marcus never gave the Semblance back (either because he didn't want to or couldn't at all).

Marcus continued to train and beat Mercury day after day, until one day when Mercury could not handle the abuse anymore and turned on his father. Their battle was great, resulting in their house catching fire and burning to the ground. Marcus was able to attack Mercury and cripple his legs, but Mercury managed to overpower his cruel father, killing him.

Shortly after their battle, Cinder Fall and Emerald Sustrai, working for Salem, arrived looking to offer Marcus a role in their organization. Instead, they find him dead with Mercury standing triumphantly over his corpse. Though Emerald was shocked to see the professional assassin dead, Cinder was impressed and offered the clearly more powerful Mercury the invitation she intended for the deceased Marcus. With nowhere else to go and no-one else to turn to, and seeing his chance encounter with Cinder after killing his father as "fate", Mercury accepted the offer. Afterwards, he received new mechanical legs to replace the ones his father destroyed.

Even years after Marcus' death, Mercury is still scarred by his torment, with it presumably being a reason as to why Mercury hates the world and people so much and is fine with it being destroyed with him finally rising to a position of power instead of submission. However, he still holds some of his father's wisdom at heart, like learning about a city by asking "the rats".

Marcus' corpse after being killed by his son. 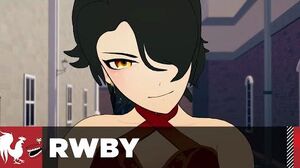