Aid his father on his goals (formerly).

Destroy Leo, Adam, Bree and Chase.
Get revenge on Douglas for leaving him to his death.
Help Giselle Victors with her plans and destroy the Davenport family (all failed).

He originally appeared to be a friendly and harmless person, he was revealed to actually be a ruthless bully, whose intent is kidnapping Adam, Bree and Chase for his creator, Douglas Davenport, who wants them. Marcus was ultimately betrayed by his father, who left him to die when the lair collapsed. When Marcus came back in the series finale, he sought revenge against his creator for leaving him to his death. He also is Leo Dooley's primary archenemy who both boys continued hating each other throughout the series.

He was portrayed by Mateus Ward.

Upon being introduced, Marcus Davenport strikes a friendship with Chase and Adam, and forms a band with them. However, he turns on Leo and sabotages their instruments and blames Leo. Leo tries to reveal who he really is, but Marcus confesses and makes a lot of excuses, he pretends to apologize but really threatens Leo.

He later manages to trick them into inviting him to there home, where he breaks into the Lab and places a secret camera. It is revealed at the end that he really is evil and is secretly working for some mysterious figure.

A few days later he lures Adam, Bree, and Chase out to get frozen yogurt. He tries to trick them into going home with him, however Leo tries to stop him. As such Marcus hacks Donald's robot car, so it would drive nonstop into the ocean, then tricks Leo into getting in, almost killing him. He later comes to visit under the pretense of visiting to see if he's okay, but accidentally lets it slip it was him who did it. Leo tries to tell Donald, but Marcus reveals he's bionic as well, and threatens Leo, telling him if Leo lets anyone know, he will expose there secrets and thus ruin his family.

A while later, Marcus again tries to invite them over, but Leo sends them off, however Marcus telekinetically closed the doors to the building trapping Leo, and reminded him of what would happen if he revealed his secret. He then telekinetically tossed a trash can at Leo, and told him to be weary as he didn't miss twice. Leo later followed Marcus back to his home, where he found a secret lair under his house. Marcus caught him, and used a giant robot to catch him. But Leo played on his arrogance, and managed to outsmart him and grab the remote. However as he did not know how it worked, the robot went haywire. Marcus managed to destroy it with his laser vision, but Leo escaped. Marcus covered up all the evidence, so the others didn't believe Leo (except Donald, who seemed somewhat suspicious), however the mysterious figure (who was revealed to Marcus's father) angrily dressed him down, telling him he had let them get too close, and would now be handling things personally.

Marcus returns, along with his father who is revealed to be Douglas Davenport, Donald's younger brother. Together they kidnap Donald, as part of a plan to lure Adam, Bree, and Chase to them. Marcus makes the call to taunt them and let them know they have his father. Meeting together outside his house, they enter a brief battle, where Marcus proves he's more powerful than them. However Chase apparently manages to surprise him with one of his new abilities and knocks him down. However Marcus then gets up, revealing it was all part of the plan, he then secures the exits and traps them in. Marcus then goes to recharge, following Douglas trapping them all. Douglas also reveals that Marcus is an android, and thus he needs Adam, Bree and Chase, because he will burn out soon (but also warns them not to tell him as he doesn't know).

However upon Leo arriving, Douglas awakes Marcus, as he wants to personally kill Leo. Leo at first confronts him with some of Donald's weapons, but Marcus telekinetically throws the one he was holding, and destroys the others. He then blasts Leo with an electric attack and leaves him to die (Leo survived, as he was wearing one of Donald's protective shirts.) The kids manage to break free, and while Donald and Douglas fight over the remote that he can use to control Adam, Bree and Chase. They take on Marcus. However Marcus is still more powerful, and defeats Adam and throws Chase on to the platform, before revealing a giant meat grinder underneath planning to drop Chase in it. Bree takes him on and temporarily manages to fight him before being overpowered, Marcus kicks Chase into the grinder, but Adam shuts it off before he can, and thus Chase simply falls to the ground.

Realizing the plan isn't working they try to all take Marcus on at once, however Marcus lets out a powerful plasma grenade attack knocking them all down. They are distracted by Leo bursting in with Donald's exoskeleton suit, however Marcus quickly defeats him, revealing a series of sinister knives he plans to cut Leo open, stopping him once and for all. However in blind rage Adam unlocks a hidden ability, releasing a great blast of energy the causes the lab to collapse. Marcus tries on last time to stop them, but is crushed under the ceiling, his robotic hand emerging from the rubble, before sparking and stopping.

Over the next 2 seasons in 2 years, Marcus has been sparingly mentioned and referenced but never seen, until the end of the episode "Bionic Action Hero" where Douglas's former partner Giselle Vickers finds Marcus (at least his hand) under the rubble, planning to use him for her plans of improved bionic androids.

After Giselle put him back together, Marcus remembered everything that happened before his death. Marcus sought revenge on his father for leaving him to his death. When he makes his appearance he mentions about his plans to defeat the Lab Rats once and for all and help Giselle with her plans when the Lab Rats attempt to attack him he quickly takes them out with his plasma grenades. Holding his father Douglas and Uncle Donald hostage Daniel attempts to save them but gets telekinesis back and forth due to Marcus's new abilities. Douglas tries to reason with Marcus about how they can be a family again but yet he doesn't want to but as soon as he attempts to kill them Donald points to Daniel that the only way to fight him is to touch his energy source his leg. Daniel replicates Marcus's powers and blasts Marcus to pieces, Leo responds "Oh, come on! I wanted to do that!". Later in the final moments Leo decides to kick/throw away Marcus's remains, but is in shock when his arch-enemy transforms into his android skin. Marcus asks Leo "Never seen a Android regenerate before?", revealing it's part of his upgrade which makes him superior to humans. Leo summons all his power for one more final battle with his arch-nemesis on a final attempt on his life, but Marcus coldly responds with his final quote "You. Will never. Defeat me!!!" But just as they are about to throw the last blast, surprisingly, his father Douglas finishes him off by blasting him, ending Marcus Davenport's life once and for all, yet Leo responds " Again...I wanted...to do that!".

Marcus initially appears kind, harmless and friendly. However he shows he is really a dark character, a ruthless, manipulative liar, who will not let anything get in the way of his plans, and will stop at nothing to complete his goals. He proves to be even worse, being openly sadistic and more than willing to murder those who get in his way, even children. However he is able to create a believable facade as a good person, he only shows his true personality to Leo, as no one believes Leo. Leo is the only when who can see his true self, this is because Leo disliked him before he revealed he was evil. Marcus seems to have a complicated relationship with his father, although normally willing to argue with him, when he gets angered Marcus clearly fears him. Marcus does have flaws as his own stubbornness and arrogance caused him to be crushed when he chose to stay behind and attempt to take out the Lab Rats.

After Giselle rebuilt Marcus, he developed deep hatred towards his father for leaving him to his death. His hatred was so strong that he refused to see reason, even when Douglas offered for him to be his son again. Despite his hatred for his dad, Marcus still hates Leo. 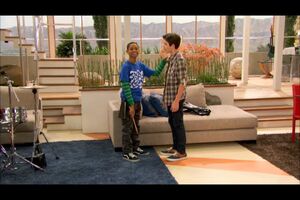 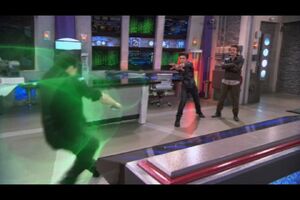 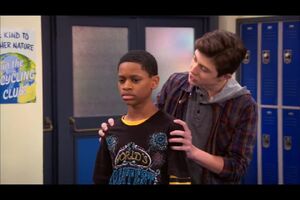 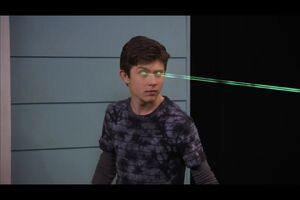 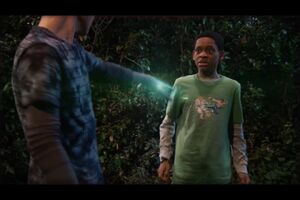 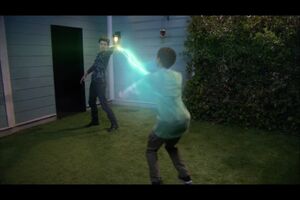 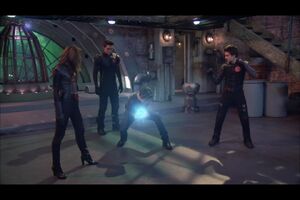