He was a lieutenant in the United States Special Forces who was tasked with eliminating Manuel Roba, a drug dealer who was the head of the Zaragoza Drug Cartel. Roba captured Washington and his team, having them brainwashed to follow his plan to smuggle terrorists and drug across the globe, but Washington and Kevin Sparks were killed by Riley to avenge his family's deaths.

Not much is known about Marcus E. Washington's past, but he joined the United States Special Forces presumably during the mid-to-late 1990s or early 2000s, reaching to the rank of lieutenant.

Washington was part of a team lead by Major Vernon in eliminating drug lord Manuel Roba, which consisted of Simon Riley, Kevin Sparks, Sykes, and Cumberland. Washington and his team failed to eliminate Roba as Vernon betrayed them since he was brainwashed by the drug lord when he attempted to eliminate Manuel previously, and the team were captured and taken to a brainwashing facility in Coahuila, Mexico. Washington was sadistically tortured by Roba and his men, being forced to spar against Riley and Sparks on numerous occasions, and eventually submitted to the brainwashing process. Washington and Sparks were allowed to escape the facility by Roba, as Riley was placed into a coffin with Vernon's corpse, and sent adrift to break mentally. Riley survived the incident, and returned home to receive help from his experience.

Returning to the United States, Washington and Sparks were tasked by Roba to smuggle terrorists and drugs into Afghanistan and other locations, but it's revealed that Riley survived as well. Washington later went to Sparks' apartments months alter to meet with him, but saw Riley holding him at knifepoint. Washington shot after him, and helped Sparks murder Riley's entire family before moving to RAF Bonnington. Washington was later killed by Riley while he was slipping, having his throat slit, and Riley killed Sparks and Roba afterward to get revenge. 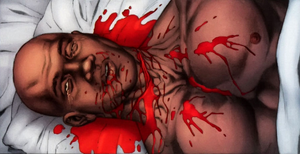