Escape from her crime.

Gain fame through committing mass murder in Camp Redwood and make it a place of infamy.

Margaret Booth is the main antagonist of American Horror Story: 1984 and the real killer of the 1970 Red Wood Camp massacre that she framed upon Mr. Jingles, her former best friend.

Initially, as the current director of Camp Redwood, she was portrayed as an odd fanatic, but still a rather neutral character and a survivor of the massacre reportedly to be committed by Mr. Jingles, until the fourth episode True Killers revealed that she was behind the massacre and thus the entire series' major events.

She is portrayed by Leslie Grossman.

Initially, Margaret was portrayed as a fanatically devout Christian who claimed that God saved her from being a victim of Mr. Jingles, even at the cost of her own ear. She is also persistent upon the ban of indecent acts that she considers as "sins", particularly the negative behaviors of 1980s American youths in general, including drinking, taking drugs, and obssession upon pornography. She aims to make Camp Redwood a "Godly" and decent place for children.

However, there are much more negative traits left to be explored upon Margaret, especially after the revelation that she was the real killer behind Camp Redwood Massacre and framed her former best friend, Benjamin Ritcher, for the murder simply because she believed he should protect her from the victims, whom she suffered from their abuse and bullying. Her incrimination eventually shaped him from a gentle and friendly man into the murderous Mr. Jingles. 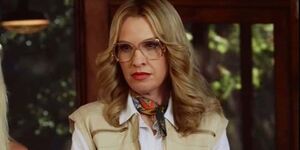 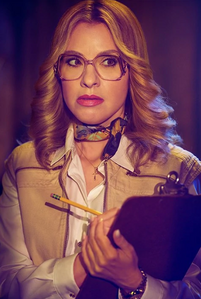 Retrieved from "https://villains.fandom.com/wiki/Margaret_Booth?oldid=3424292"
Community content is available under CC-BY-SA unless otherwise noted.