Preaching that tattoos (particularly religious tattoos) are blasphemy against God.

Seeing into people's eyes as if seeing into their own souls.
Abusing her son Jacob Goodnight.
Punishing and killing people she sees as sinners.

Keep punishing and killing people in the name of God.

Margaret Goodnight, also known as Margaret Gayne, is the secondary antagonist of the 2006 slasher film See No Evil.

She was portrayed by Cecily Polson.

Margaret is the (possibly widowed or divorced) mother of mass murderer Jacob Goodnight. Ever since Goodnight was a boy, Margaret was torturing and berating him for years. She even once brutally tortured a teenage girl at her house when Jacob was in his teen years as she ripped out her eye and forces him to see the "evil" within the girl's eye.

The police officer named Frank Williams and his partner Blaine enter an abandoned house, only to find a young woman held hostage with her eyes ripped out. Suddenly, Blaine is savagely murdered by an unknown figure with an ax before Frank is attacked too. Frank manages to fight off the man, but his arm is severed in the process. In the aftermath, detectives find seven bodies in the house, all of which have had their eyes ripped out.

4 years later, Frank is taking a group of delinquents - Russell Wolf, Richie Bernson, Christine Zarate, Zoe Warner, Michael Montross, Kira Vanning, Tyson Simmons, and Melissa Beudroux - to clean up the abandoned Blackwell Hotel in order to turn it into a homeless shelter, as explained by the owner Margaret Gayne. As the delinquents work, they do not realize that reclusive psychopath, Jacob Goodnight has holed away in the rotting hotel.

Tyson and Richie decide to look for the previous owner's safe, which was never recovered after the fire that broke out in the hotel, while Kira deals with being reunited with Michael, her abusive ex-boyfriend who was the one who sent her to jail. While searching for the safe, Tyson and Richie discover a dead body. Richie freaks out and attempts to leave, but is attacked by Goodnight, who drags him into an elevator, in front of a terrified Tyson.

The hotel's owner and curator, Margaret Gayne realizes the elevator is being used, and informs Frank's partner, Hannah, who goes to check if everyone is in their rooms. However, the elevator does not stop and takes Hannah up into the damaged floors of the hotel, where she is swiftly killed by Goodnight, who rips her eyes out. Meanwhile, Christine agrees to help Kira escape the hotel after catching Michael hurting her in the bathroom. While Kira is escaping, she is attacked by Goodnight, who drags her into the dumbwaiter. Christine, Frank and Margaret arrive just as she is assaulted, and Christine informs Frank the others have gone to the restricted penthouses to have a party. While Margaret stays behind to phone the police (supposedly)', Christine and Frank enter the elevator, where they find Hannah's blood, before bumping into Tyson, who warns them of the man who took Richie. Frank realizes the man Tyison described is the same one that killed Blaine, and Frank heads out to find Jacob (likely to get revenge). But Jacob finds him first, and suddenly a hook goes Frank's chin and drags him up to the roof, dumping his body in front of Tyson and Christine almost immediately afterwards.

Kira is held hostage by Goodnight, due to her religious tattoos. She awakens in Goodnight's lair, where Richie has been tied up. Goodnight soon appears and gouges Richie's eyes out, before we see a flashback to Goodnight's childhood (being locked in a cage, drowning in the shower, and watching a strapped woman have her eyes removed by his mother), suggesting his killing sprees are owed to religious abuse.

Meanwhile, Zoe, Michael, Russell and Melissa are taking drugs in a penthouse. Soon after, Russell and Melissa leave for some privacy. As the pair make out, they are attacked by Goodnight. They manage to escape and hide in a room, where they realize they can climb out the window to get to the ground level of the hotel. Russell lowers Melissa out of the window by a rope, but Russell is stabbed to death by Goodnight, who then lets Melissa fall. The rope stops her head from hitting the ground, but she hurts her hand on impact, allowing a group of stray dogs to devour her.

Zoe and Michael become sick of each other and attempt to go back to their rooms, but are attacked by Goodnight. They hide, but Zoe is found when her cell phone goes off. She pleads for help, but Goodnight shoves the phone down her throat, killing her. Christine and Tyson decide to stay and try to find Kira, and bump into Michael. Goodnight finds them; Christine and Tyson escape through the elevator shaft, forgetting about Michael, who is violently beaten up by Goodnight.

Christine and Tyson find Goodnight's lair and create a distraction to free Kira. As Christine tries to open Kira's cage, Tyson attempts to fight off Goodnight, but he gets electrocuted by his taser before being crushed with a vault. Christine hides as Goodnight returns. Margaret turns up and unexpectedly reveals herself to be the mother of Goodnight. Margaret tells Kira that she lured Frank back to the hotel to get revenge on him for hurting her son four years before, and that the prisoners all had to die because they were full of sin, including Kira. Margaret attempts to shoot Kira because Jacob won't, but Goodnight kills her by accident, when angrily throwing her at a wall, only to have a large nail on the wall impale her though the head.

Margaret's corpse appeared in the morgue along with the not-so dead Jacob in See No Evil 2. 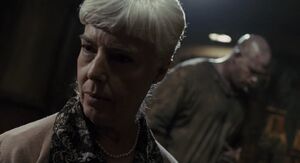 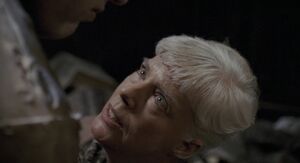 Margaret with her son, Jacob Goodnight. 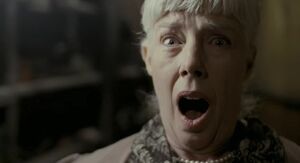 Margaret about to be impaled on a large nail