4th Ranked Assassin of the UAA

Playing Philistine to her victims.

Kill those who she believe are sinners'

Margaret Moonlight is the 4th ranked assassin in No More Heroes 2: Desperate Struggle.

She's a blond hair gothic lolita character who fights Travis at the top of a supermarket building. She wields two giant, bladed scythes that shoot bullets and can be used as snipers, called Le Croissant du ange.

Margaret fights with two Scythes at close combat. If Travis gets to far, she'll use her scythes as sniper rifles. When she shoots them the emit crosses. Margaret also has the ability to teleport. The song she whistling is called Philistine, the last thing her victims ever hear. She fights and is ultimately killed by Travis Touchdown when he impales her through the torso and slices out her midsection, disemboweling her. But not before Travis tells her that he has memorized her song. 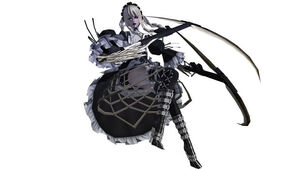 Retrieved from "https://villains.fandom.com/wiki/Margaret_Moonlight?oldid=3648690"
Community content is available under CC-BY-SA unless otherwise noted.