Live a pure and Christian life.

Margaret White (née Brigham) is the main antagonist of Stephen King's novel Carrie, all of its subsequent film adaptations, and the Broadway musical. She is the abusive and religious mother of Carrie White, and is obsessed with her excessive convictions on Christian principles of modesty and chastity.

She was portrayed by Piper Laurie (in 1976), Patricia Clarkson (in 2002), who also portrayed Ava Paige in the Maze Runner series, and Julianne Moore (in 2013), who also portrayed President Alma Coin in The Hunger Games: Mockingjay Parts 1 & 2, Mother Malkin in The Seventh Son and Poppy Adams in Kingsman: The Golden Circle.

The wife of the late Ralph White and the mother of Carrie, Margaret lived with her parents, John and Judith Brigman, in Motton, Maine until 1960, when she moved to Chamberlain Center with Ralph White. 2 years later, he two married on March 23, 1962; shortly after, on April 3, 1962, Margaret was admitted to Westover Doctors Hospital for a suspected miscarriage. 5 months later on August 19, 1962, she last wrote to her mother, and later became pregnant in December that year, though she was convinced that she was afflicted with "cancer of the womanly parts".

Her husband died in February 1963 in a grisly construction accident, and she gave birth to her daughter alone on September 21, 1963. 3 years later on August 17, 1966, her house was deluged with stones from the sky brought on by her daughter's telekinesis after she punished the girl particularly hard.

Margaret White was very emotionally unstable and suffered from untreated mental illness. She was an extremely abusive and religious zealot who punished her daughter continually for any and all "sins", viewing her as a demonic child and showing no remorse over severe emotional and physical abuse. She also heavily believed herself to be continually under assault from evil forces.

In the novel's climax, Margaret was killed by Carrie, ending her reign of terror, sadly before this occurs, the abusive Margaret is able to stab her daughter - this would later prove to be fatal and Carrie died a short time later in the arms of one of her few friends, Sue Snell. In the movie, Carrie died along with her mother as their home crumbled on top of them due to Carrie's telekinetic powers gone awry.

In the original 1976 film adaptation, she died after having been stabbed and crucified by the kitchen knifes unleashed by the stabbed Carrie's telekinetic powers.

In the 2002 TV film, she died because of a massive heart attack brought on by Carrie's power (according to the novel Carrie) when she tried to drown her daughter in a filled bathtub while reciting the "bedtime prayer".

The Broadway musical portrays Margaret to be a much more complex and sympathetic character who genuinely loves and wants to "save" her daughter. She shows remorse after beating and locking Carrie in the cellar following the shower incident. In the first act finale, "I Remember How Those Boys Could Dance", Margaret reveals that Ralph had sweet-talked and raped her, then left her while she was pregnant with Carrie.

According to the 1976 film's sequel, The Rage: Carrie 2, Margaret's ex-husband Ralph, long before his death, had another wife, Barbara Lang, who had in the same way, given birth to her daughter Rachel, Carrie's half-sister. 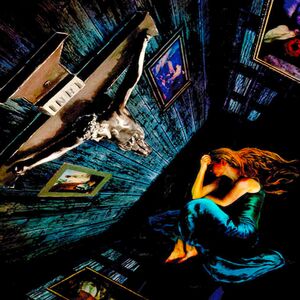 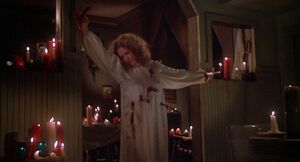 Margaret White's death.
Add a photo to this gallery

Retrieved from "https://villains.fandom.com/wiki/Margaret_White?oldid=4319907"
Community content is available under CC-BY-SA unless otherwise noted.