Being with her father, Diego.

Maria Gomez is one of the two secondary antagonists (other being Diego Gomez) of the CGI film Resident Evil: Vendetta. She is a bodyguard and bioterrorist who works for Glenn Arias, who seeks vengeance by unleashing the trigger virus on New York City.

She was voiced by Sayaka Ohara in Japanese and Cristina Vee (who also voiced Elsa Granhiert in Re:Zero and Verosika Mayday in Helluva Boss) in English.

Maria was an ordinary human and friend of Glenn Arias and his family, like her father Diego. On the day of Glenn's wedding, a government of an unknown nation ordered a smart bomb to be dropped to the wedding site, killing all guests but three-Glenn, Diego, and Maria. After the incident, Maria underwent unspecified experimentation and received an unknown number of physicals, and possibly mental, and enhancements.

As Arias leaves with his B.O.W. associates, Maria and Diego Gomez, the BSAA arrives just in time to rescue Chris by slaughtering Kathy and the remaining zombie horde with Chris vowing revenge on Arias.

Meanwhile, Rebecca Chambers, now a professor at a university specializing in vaccine development, a former member of Chris' S.T.A.R.S. unit and survivor of the infamous mansion incident, studies a new form of T-virus coined Anomality virus or "A-virus", that is capable of laying dormant any individual until the right trigger is presented. She identifies three component to the virus: The T-virus, Las Plagas and the dormant virus. The research labs are soon attacked by Maria, who releases the virus in aerosol. While her colleagues quickly turn into zombies, Rebecca is able to formulate a vaccine that she administers on herself immediately thereby being immune to the gas. After fending off some zombies, Rebecca is then rescued by Chris, who briefs her on Arias's plan and motives.

While Rebecca is watching her face a bathroom stall door opens, she finds a dead body and attacked by Maria They succeed in capturing Rebecca, while Leon and Chris team up to plan a rescue operation and decrypt Arias' plan of a large-scale attack on New York City.

Maria and the soldiers are about to unleash the gas, but was destroyed by a BSAA helicopter, after that Maria falls down on the street and pass out.

Later, Maria seemingly in perfect health and with no injury but now having blood-red eyes, headed back into the building and found her father's mask in the ruins, and vowing vengeance for her father and Arias death.

Maria is a mysterious, quiet, and calm woman. She's the assistant of Glenn Arias, and the daughter of Diego. She rarely shows any of the emotions, unless around her father. She is said to be physically enhanced and modified.

Maria seems to have various skills pertaining to stealth, strength and speed, an example of speed and stealth is when she snuck up on her enemy's with great swiftness. Her Strength is beyond average as she was able to carry Rebecca on her shoulder with ease without showing any signs of exhaustion. 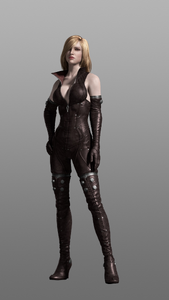 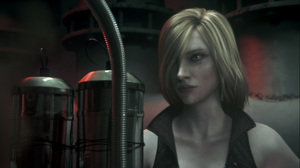