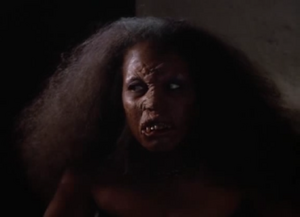 Mariana is a minor antagonist from Howling II: Your Sister is a Werewolf.

She was portrayed by Marsha A. Hunt.

Mariana is one of Stirba's evil werewolf minions, and she was first shown at the funeral proceedings for Karen White. Later in the film, Mariana flirted with a punk gang at a bar, and took them to a deserted warehouse, all the while leading them to believe that they would have their way with her.

Mariana turned heel against the group, summoning her werewolf henchmen after the punks, while she snarled and watched. During the attacks, the evil Mariana appeared in partial werewolf form, and gave a sinister snarl to display her villainous persona. She was also later shown in various scenes engaging in a sexual encounter with Stirba and Vlad. In the film's climax, Mariana was sent by Stirba to fight against protagonist Ben White, only to end up killed by Ben with a silver knife. 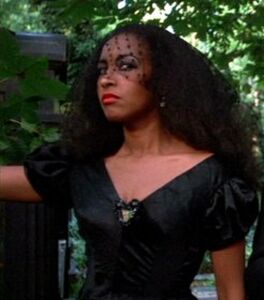 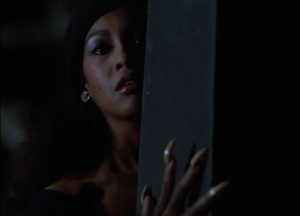 Mariana turning heel
Add a photo to this gallery
Retrieved from "https://villains.fandom.com/wiki/Mariana?oldid=3491820"
Community content is available under CC-BY-SA unless otherwise noted.