Marie is one of the main antagonists of the 2012 female-dominant video game Skullgirls, serving as the final boss for most of the characters' arcade modes. A once-ordinary girl whose wish for vengeance against those who tortured her friend was warped by the Skull Heart, she now exists only to destroy the Medici Mafia.

She was voiced by Kira Buckland.

Marie was an orphan left behind by the great ten-year war among the three largest kingdoms, Canopian, Gigan, and Chess. Growing up in a tiny town left ravaged by the war, she and her best friend, Patricia Watson, were one day attacked by the human traffickers and slave traders that had taken over the deserted No Man’s Land. While Patricia stayed to fight, ultimately being captured, tortured, and eventually horribly mutilated by the traders, Marie instead turned and ran, abandoning her friend out of pure fear. She didn’t make it very far into the desert before coming across a strange nun amongst the ruins of collapsed buildings who offered her the Skull Heart, and any wish she so desired.

7 years after the war, Marie obtained the Skull Heart through unknown means. She used it to punish the slavers who had tormented her and Patricia, but transformed into the Skullgirl in the process. However, her strong will allowed her to resist the influence of the Skull Heart and continue her quest of vengeance - having disposed of the ones who enslaved her and Patricia, she turned her attention towards their sponsors: the Medici Mafia.

After arriving in New Meridian, Marie set up base in the catacombs of the local cathedral. She joined forces with the mysterious Double, although the exact nature of their meeting is still unknown. Marie also came into conflict with "Last Hope", an elite squad of Anti-Skullgirl Lab operatives, and wiped them out. The sole survivor, Valentine, was coerced into joining the Skullgirl as her second elite minion.

Sometime later, Marie discovered that a number of people around the Canopy Kingdom were seeking her out, each for their own reasons. She waited in the catacombs beneath the cathedral for anyone bold enough to challenge her, but the true version of events remains unknown.

As the Skullgirl Marie can raise and manipulate the undead, more than just moving like they did in life, she can also make them and the individual parts of them float. When grouped together, they can even be powerful enough to lift a building.

Marie is also capable of unlimited but slow flight (seen in every gif but worth mentioning), and regeneration. WoG that has long since been lost to deleted twitch archives states that if that Skull Heart is not either wished upon or destroyed once a skullgirl is beaten, the skullgirl will eventually regenerate from anything. She did, however, regenerate faster than Valentine could hurt her. 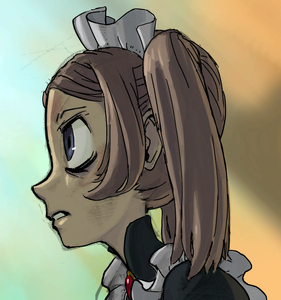 Marie as a indefense human girl. Double offering Marie the opportunity to use the Skullheart for her convictions. 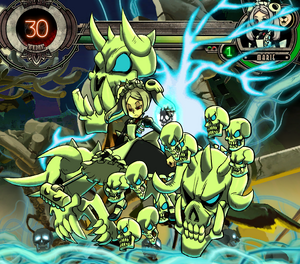 Marie in first phase form of the Story Mode.