Steal the souls of innocent people to live forever (succeeded only to backfire on her).

Marie L'Angelle is one of the main antagonists of the Preacher comic book series and AMC's television program of the same name. She is the grandmother of Jesse Custer.

She was portrayed by Betty Buckley in the TV adaptation's 3rd season, and Julie Oliver-Touchstone in a cameo appearance during season 2.

Marie L'Angelle is the mother of Christina L'Angelle and the grandmother of Jesse Custer. She is the matriarch of Angelville and descends from an old French family where, according to tradition, all the men become preachers, while the women's only purpose is to birth the next generation. When Christina ran away from Angelville, Marie sent her henchmen Jody and T.C. to retrieve her. When they finally tracked down Christina, they discovered that she had a child, Jesse, out of wedlock with John Custer. After a brief fight, Jody and T.C. kidnapped the entire family and brought them back to Angelville. John and Christina were forced to marry, and John was also forced to become a preacher. Eventually, the family attempted to escape, but didn't get far before they were caught. As punishment, John Custer was executed by Jody in front of Jesse, on Marie's orders. This deterred any future escape attempts.

When Jesse was ten, Jody killed his dog for humping his leg. Jesse was infuriated by this, and tried to attack Jody, only to be stopped and scolded by Marie. Marie decided to punish Jesse for swearing by sealing him in a coffin and subsequently lowering him to the bottom of a swamp, with only a tube for air and water, but no food. Christina protested and tried to save her son, but this only caused her to be dragged away by Jody to be murdered. Jesse was imprisoned for a week.

When Jesse was 16, his best friend Billy-Bob was killed by T.C. after the former witnessed T.C. rape a chicken. Enraged, Jesse attacked T.C., but was stopped by Jody, who challanged him to a fight. Though Jesse fought hard, he was ultimately no match for the henchman, and was defeated after his jaw and arm were broken. He was subsequently imprisoned in the coffin once more by Marie, for calling T.C. a "cocksucker".

After Jesse was released, it wasn't long before he fled Angelville. Soon, Jesse met the love of his life, Tulip, and spent several years with her, making a living stealing cars. Unfortunately, Jody and T.C. eventually caught up with him while he was in a park in Pheonix on a date with Tulip. While Tulip was getting him a beer, Jody and T.C. approached Jesse and offered him a chance to surrender peacefully, in exchange for them not killing Tulip. Jesse was forced to leave with them and return to Angelville, where he was punished by being stuffed in the coffin for a month. After that ordeal, Jesse completely surrendered and embraced "God's calling", becoming a preacher in record time thanks to his grandmother pulling some strings.  A couple of years after being separated from Tulip, Jesse became the preacher in Anville, and spent the next three years delivering sermons.

After hearing about the incident in Anville, Marie ordered Jody and T.C. to retrieve Jesse once more. They eventually found him in Dallas, and kidnapped both him and Tulip this time around. Jesse tried to use the Word on Jody, but it didn't work. Jesse was reunited with his grandmother in Angelville, where she expressed a desire to use Jesse's new power to further her own interests. She also revealed that the reason she and her henchmen were immune to the word was because she made a deal with God. Marie told Jesse he had until morning to say goodbye to Tulip, but when the sun comes up, she will have Jody shoot Tulip in the head. After speaking with her grandson, Marie spoke to God. He gave her premission to kill Tulip, and told her that he would have a look at Tulip's body before leaving. Marie kept her promise, with Jody executing Tulip in front of Jesse.

God, however, betrayed Marie and resurrected Tulip. He told her that Marie and her henchmen were evil people and that he was only trying to teach Jesse a lesson, and to get him to stop looking for him. Before he left, he removed the immunity he bestowed on Angelville. After Jesse discovered his powers worked once more, he beat T.C. senseless and killed all of Marie's other henchman save for Jody by telling them to burn using the Word, which set them on fire. Meanwhile, Tulip killed an injured T.C. and came across Marie. She tipped over Marie's wheelchair and locked her in a room, trapping her inside the burning house. Soon, the flames reached Marie's oxygen tank, causing an explosion that sent Marie flying through the window in a ball of fire, finally killing the vile old woman.

Long ago, Marie L'Angelle made a deal with Satan for an everlasting life in exchange for her soul when she finally passes. L'Angelle has a demented way of loving her family, going as far as killing her own daughter. When she found out about Jesse Custer, she had her henchmen find him, bring him to her and took him in as a L'Angelle. Eventually he ran away but came back, where she had Jesse offer his soul as a debt payment for Tulip O'Hare's resurrection.

When she learned Jesse was in possession of Genesis, she signed Jesse's soul over to Satan. So, if Jesse kills her, his soul will get sent to Hell along with Genesis. Marie also arranges for Tulip to be taken to Hell as well for trying to kill her. Jesse comes back to Angelville to kill Marie, as she knew he would.

After dispatching of her henchmen, Jesse confronts his grandmother. After Jesse uses the Word on her to make her release both himself and Tulip from Hell, she informs him of the new deal she made with the Devil. Infuriated, Jesse finds another way to get back at her, by using the Word to order her to destroy the souls from Osaka, much to her horror.

Still not satisfied with his revenge, Jesse comes back and straps her to her soul chair, then proceeds to drain the souls from her body, killing her once and for all.

At first, Marie seems like a trusting and caring woman when in fact, she is a ruthless, manipulative, greedy and all around vile person. Every deed she does, even if it's seemingly good, is motivated by her own self-interest. Despite her preachings about the importance of family, she is more than willing to sacrifice them to her advantage. This emphasis on family is more than likely a manipulation tactic, keeping those that serve her (like Jesse and Tulip) in line. Marie is also very vengeful. Her punishments are exceptionally cruel and psychotic, from soul draining to enslavement to stuffing family members in a coffin and imprisoning them at the bottom of a swamp. She is shown to be afraid of death due to a deal she made with Satan, not wanting her soul to go to Hell. All of the above makes her death at the hands of her grandson, Jesse almost symbolic, first being forced to destroy the souls she worked so hard to gain and then being drained of her own soul. 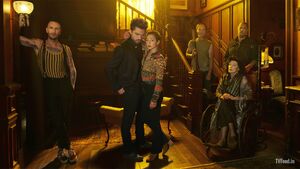 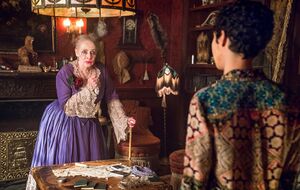 L'Angelle without her wig.

L'Angelle makes a deal with Satan. 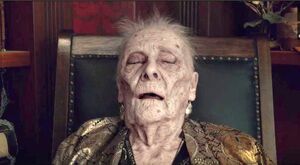 L'Angelle's death.
Add a photo to this gallery
Retrieved from "https://villains.fandom.com/wiki/Marie_L%27Angelle?oldid=3704037"
Community content is available under CC-BY-SA unless otherwise noted.