Marifer, also known simply as "The Demon", is the main antagonist of the 2017 Mexican short fan film What's Wrong With Mom?, which won the "My Annabelle Creation" Contest and was made a part of the official The Conjuring Universe canon. It is a dark and demonic entity that possesses the mother of a small family.

While possessing the mother, it was portrayed by Perla Corona.

A father and daughter are seen praying and holding a cross next to a table, with the father warning his daughter not to look at her mother. The mother is releasing a series of guttural moans, then begins to sadistically chuckle. The daughter asks her father if her mother is going to die, and the father assures her that she is not.

The doorbell rings, and the father thinks it may be Ed and Lorraine Warren, who they called to help. He gets up, and the daughter keeps praying despite the distorted voice of her mother calling for her to come to her. The mother begins eerily singing, culminating in her teleporting away and all the lights in the house going out.

The daughter, sobbing, gets up to investigate, analyzing the seat where her mother once was. As she looks for her missing mother, the clock stops ticking and a nearby cross turns upside down. The daughter sees this and gasps in horror, and then is pulled into the darkness by an unseen force, screaming until she is cut off by demonic laughter.

The father returns to find his family missing, and begins shouting the demon's name. 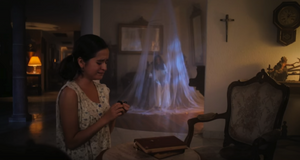 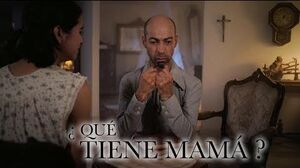