Reunited with her father (succeeded).

Mariko Kurama (also known as Diclonius Silpelit Number 35) is a major antagonist in the Elfen Lied series, making her debut appearance in the 53rd chapter of the Manga and the 10th episode of the Anime.

She was voiced by the late Tomoko Kawakami in the Japanese version, and Luci Christian in the English dubbed version.

Mariko Kurama is a "third generation" Diclonius, a Silpelit born from an infected carrier who inherited the Vector virus from a Silpelit who was born from parents infected by a First Generation Diclonius. Mariko was the most powerful of the Diclonii, with some 50 vectors (26 in the anime) and a long range.

She is the daughter of Doctor Kurama and his late wife Hiromi, who made a dying plea that he spare their daughter, despite her horns. He agreed to do whatever was demanded of him by Director Kakuzawa without objection and agreed to be kept away from his daughter, who was kept by a female scientist named Saito in the Diclonius Research Institute.

Despite or perhaps because of this agreement, Kurama became close to another Silpelit girl, Number 7, or Nana, who called him Papa and believed that he really was.

In the anime, Mariko is introduced in episode ten (Chapter 53 in the manga) when she is released from her isolation chamber. Scientist Saito greeted the emaciated girl upon her emergence, believing they had built up a mother-daughter relationship. Mariko proved her naive when she rejected this idea, tearing Saito apart and sending her upper torso through the control station's glass partition to prevent them from stopping her. The dying Saito pressed a button that set off one of the explosives bound into Mariko's body, blowing off her right arm. Deputy Director Shirakawa and Kurama's assistant Isobe then took over her handling, warning her of the other explosives implanted in her body in order to keep her under control. It would later be revealed (though only in the manga version of the same events that closed out the anime) that Saito often told her young charge that neither of her birth parents had ever wanted her, when in fact one died to have her and the other gave up his freedom to save her.

Feeling Kurama's disobedience in not killing the injured Nana broke the agreement to protect Mariko, Director Kakuzawa sent her and her handlers off to exterminate Nana and capture Kaede/Lucy/Nyu. This was also meant to serve as a distraction meant to keep those best able to oppose a pivotal phase in Kakuzawa's plan to supplant normal Humans with Diclonius as it was finally enacted with the enforced aid of Doctor Arakawa.

Mariko was sweet and innocent in some respects and yet had no qualms about lashing out at all Humans, especially those she saw as tormentors, and even fellow Diclonius. She also thought killing was a game, as she demonstrated when she first faced Nana. When Nana extolled the virtues of her 'Papa', Mariko angrily denounced her own and resented Nana for having one, not realizing both were the same man. She managed to manipulate Kurama's assistant Isobe into giving her the codes to the remote that could keep her bombs from exploding, this after maiming him and before beheading him. Though overpowered by Mariko, Nana managed to use her special ability to disable Mariko's vectors. Kurama then showed up, almost ignoring Nana in favor of Mariko, his true daughter. Explaining his past, Kurama tried to kill Mariko, but was talked out of it by Nana. Father and daughter at last reconciled.

A military bombardment followed, which Mariko saved them from while briefly becoming an amnesiac like Kaede, saying 'Myu'. During the fighting, Lucy showed up first as the infantile Nyu, who they tried to use as a bargaining chip to oppose Kakuzawa's master plan. But a desperate Kurama shot Nyu, causing her to re-emerge as Lucy, who wrecked the control device for Mariko's body bombs, making their explosion inevitable. Mariko, accepting her fate and her father's love, urged Nana to take care of him before facing the less powerful but more experienced Lucy for the last time. Though dismembered and finally decapitated by Lucy, the explosion of the bombs inside her also wounded Lucy and forced Nyu's personality back to the surface. Nana later weeps at all the wonderful things in life that Mariko will never know.

In the conclusion, Kurama and Nana are seen at Mariko's grave, burying her ashes. In the anime, she is killed along with Kurama when they embrace in a memory of the life they could have had together, before Kurama deliberately sets off her bombs. It should be noted that the battle with Lucy in the anime was all-out, with no distractions, and Mariko won this fight handily. Nana has a moment of mourning Mariko very similar to the manga, except in this case, she mourns Nyu as well, when it seemd like Lucy had died in battle.

The Clones of Mariko

Unknown to most, Director Kakuzawa ordered the eccentric scientist Doctor Nousou to use Mariko's genetic material to breed clones of Mariko, though only four of these out of over a thousand were truly viable.

The viable four were named Alicia, Barbara, Cynthia and Diana. Each were outfitted with control devices, and while formidable, did not quite have the raw power of Mariko. By appearances, they were infantile and devoted to Nousou, mewling 'Myu' as Mariko herself had, when in an infantile state. Nousou was at last directed to use the girls in his planned assault on Maple House, where Lucy lived in her other personality as Nyu. To prove his control over the clones, Nousou reluctantly had Diana stab herself first in the arm, and then through her own heart. Unable to join the mission, Diana was scheduled for a heart transplant from one of the many defective clones.

At first, the assault went smoothly, with the clones easily negating both Nana and Nyu, who in any event had no vectors when she wasn't Lucy. But when the soldiers involved roughed up the members of the household, Kouta went wild, grabbed a gun and held Nousou hostage, which caused him in turn to be shot by the Agent overseeing the operation. This shocked and enraged the Nyu persona, who finally gained vectors of her own and began to destroy the force even before she eventually became Lucy. Whoever she was, she swiftly undid every last advantage the attackers had, the carnage also finally awakening Kouta's lost memories. In short order, Cynthia was cut in two, Alicia was pummeled to death and torn apart, and it appeared Barbara had been crushed by a falling helicopter when she, like the others, refused to leave Nousou's side. In a heart-wrenching twist, a deranged Kurama, still grieving the original Mariko, stumbled upon the scene, grabbing up the dying Cynthia just in time for her to murmur 'Papa' at him before giving out. Now driven further into madness, he ran off with her top half, holding it and calling her Mariko. But one of Cynthia's dying motions had been to take off one of Lucy's horns, making her helpless and enabling her capture. The Agent ordered the crashed helicopter dug through, with Nousou and Barbara found alive.

Once in the hospital, the loss of Alicia and Cynthia, coupled with the injuries sustained by Barbara and Diana ate at Nousou's conscience, and he realized he cared for his charges like a father might. To this end, he removed Barbara's control device, but to his shock, the devotion he'd seen was non-existent without that device. In no uncertain terms, Barbara denounced Nousou, and then killed him even as he apologized. Remembering Nana, who lived among Humans, Barbara determined to find her and punish her as a traitor to Diclonius-kind. But when Barbara found her, Nana had also found Kurama, and given Cynthia's remains a proper burial, and to Barbara's shock, Kurama embraced her, again in his confused state thinking the clone was Mariko reborn. Pushing him off, Barbara denied any connection to him or Humanity, and held Kurama hostage while she moved to kill Nana. The threat to Nana awoke Kurama from his madness, and he shot and killed Barbara. Kurama felt she could have stopped him, but chose not to, perhaps feeling some sense of connection she denied. Since Mariko's actual remains were exploded, it remains possible the ashes Nana and Kurama buried at her grave were Barbara and Cynthia's.

Diana recieved her heart transplant, and she kept docile until her defective deformed clone 'sisters' caused her to awaken. Used by a desperate Arakawa as a weapon against the other clones, she was freed from her controls, and began to act just like Barbara had, threatening Arakawa until the arriving Agent (actually a spy against Kakuzawa for the Japanese government) replaced the controls. Diana continued to fight until decapitated by the advancing reject clones.

Many born with hideous disfigurements and mutations, the rejected clone diclonii lived lives of horror, treated like animals both for the slaughter and every type of deranged experimentation. If the staff at the Diclonius Research Institute ever previously had illusions that their work had value for the defense of Humankind, the cruel treatment of these creatures born and bred in misery should have erased them. It is not known when these girls were created and bred; presumably it began after Doctor Kurama fled the Institute, since he was shocked to see duplicates of his dead daughter. Kept in the underground grotto beneath the facility that was once home to Director Kakuzawa's persecuted horned (though Human) ancestors, the irony of the clones' treatment was not one that connected with the Director, though given how he treated his own children and his total disregard for Silpelits, this is not surprising.

Frequently, these girls were killed, and their spinal columns harvested and then hideously enlarged to serve as bio-weaponry material in the creation of cyborg fighting craft that were basically Giant Diclonius Tanks, using vectors to move and attack. Viewed briefly as the ultimate weapon in combating the Diclonius and especially Lucy, these tanks were ineffective in conventional combat, and proved fragile both in transport and in active use for their intended purpose. This boondoggle mocked even their unwilling sacrifice.

A confluence of events shook the reject clones out of their torpor. Beneath the facility, Lucy's final stand against the Kakuzawas resulted in large seismic jolts as Lucy fought the gigantic form of Anna Kakuzawa, finally destroying it entirely. Above the clones' position, Doctor Arakawa perfected an Anti-Diclonius Birth Vaccine ironically started by the late Director's eldest son. Sensing both their Queen and the vaccine, which was the ultimate threat to their existence, the clones rose up in a fury, their power and Lucy's splitting the island in two while they hunted down every last Human they could find, and the mercy they were never shown became the mercy their former captors could not hope to get. With the aid of the Agent, Arakawa and her vaccine managed to get to rescue, but the island was doomed, with only Lucy and the fleet rescuing Arakawa making it out. The haughty Director, now a headless corpse, washed away in the same tides as the clones he held in such disregard. When the last of the clones was drowned, and their miserable existence ended, only then could Mariko Kurama, sinner and little saint, finally rest in peace.

When released from control, both Barbara and Diana seemed to possess accentuated versions of Mariko's most negative traits, including manipulation, deception, sadism and petty jealousy. Despite this, Kurama's mere presence caused two of the clones to almost immediately recognize him. Kurama for his part came to believe that the Director had set him up all along to kill Mariko in some fashion, and that Barbara made him fulfill that twisted wish. 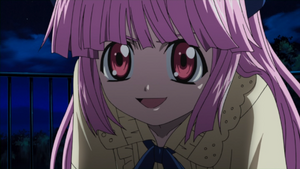 Retrieved from "https://villains.fandom.com/wiki/Mariko_Kurama?oldid=3816702"
Community content is available under CC-BY-SA unless otherwise noted.