Get revenge on Windscale for firing her.

Marina Tsumura is the main antagonist of the first two episodes of Kamen Rider W. She uses the T-Rex Memory to transform into the T-Rex Dopant and also Shotaro Hidari's childhood friend.

In her human form, she was portrayed by Meibi Yamanouchi as an adult, and Emiri Yagi as a child. In her Dopant form, she was voiced by Hajime Iijima.

Marina Tsumura was once a childhood friend of Shotaro Hidari

After she was fired from her job as Windscale's top designer along with her boyfriend Yousuke Togawa, the two buy Gaia Memories to use to exact their revenge against the company for firing them. However, after Yousuke goes berserk, Marina hired Shotaro to track down Yousuke so she can kill him.

After Double defeated the Magma Dopant and destroyed the Magma Memory, Marina as the T-Rex Dopant abducted and murdered Yousuke. When Shotaro discovers she is the T-Rex Dopant, Marina assumes her T-Rex Dopant form and attempts to kill him, only to be fought off when Shotaro and Philip transform into Kamen Rider Double. T-Rex Dopant then transforms into the Big T-Rex and attempts to flee pursued by Double. However, Double manages to destroys the T-Rex Memory with HeatMetal's Metal Branding Maximum Drive, knocking Marina out of her transformation. Double then gives Marina to the police to arrest her.

In the alternate timeline where Shocker dominated the world, the T-Rex Dopant was one of the monsters who served the organization in the alternate 2011. It was part of a group of Dopants that battled Kamen Rider Double when the Kamen Riders returned to fight Shocker.

The T-Rex Dopant was one of the monster souls that resided in the world within the Magic Stone. It appeared in its Big T-Rex form as part of an army of Amadum's strongest monsters that fought against the 14 Heisei Riders. 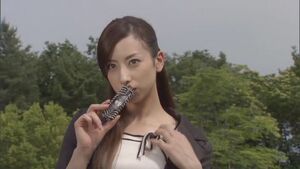 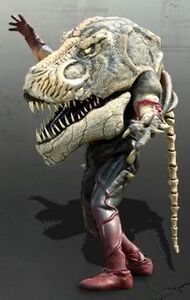