All the same powers as the real Mario

Unlike some sketches, where he is depicted as good-hearted (though a bit foul-mouthed), the Mario that appears in the Robot Chicken sketch "Grand Theft Mario" is quite vengeful acting as the main protagonist villain of the sketch.

He was voiced by Adam Talbot.

The Mario brothers are driving their car across the Mushroom Kingdom when they approach a bridge, but it is out of order. They drive to Vice City until they get a flat tire, and Mario pulls into a repair garage and they buy a new car. They then go to park the car next to a parking meter, but Luigi tells Mario they have no money. Mario tries to get some money by smashing some bricks (a reference to the Mario games), but he hurts his head and falls on the ground. Luigi asks him if he's okay, then sees a little girl walking a turtle thinking it's a Koopa Troopa. Luigi then squashes the turtle and the girls yells at him for killing her pet turtle. A police officer walks by, and asks what happened then tries to arrest Luigi before he can even apologize. But before he can handcuff Luigi, Mario comes by and saves Luigi.

They stop near a female hooker, thinking she's Princess Peach, grab her and drive away. The hooker's pimp comes in and sees that they stole his worker, he shoots at them in rage, and shoots Mario in the hand. Mario starts panicking and Luigi suggests they find a mushroom to heal Mario's hand. The hooker says she knows a guy who can help heal the injury. They stop near a drug dealer and Mario takes a mushroom and starts hallucinating, the hooker sneaks away at the back of the car as police sirens sounds. Mario then drives recklessly throughout Vice City, and runs over several elder people thinking they're coins. Mario and Luigi then drive into a barricade, their car explodes and they hit a wall.

Two police officers show up and the Mario brothers surrender. Luigi holds up a wrench, and is shot to death by the police. Mario cries over the death of his brother, and shouts, "You killed me brother! You sons of a-bitches!" and shoots down the police, SWAT teams, and even a helicopter, which loses control and crashes into a building. The military shows up and Mario yells in anger, "You'll never take me alive! You motherf--!" But is shot to his death mid-sentence. Mario then falls on the ground, and the camera rises showing the bodies of Mario and Luigi.

Wanting to lose weight, Mario joins a gameshow hosted by Barbie parodying "The Biggest Loser". During the final event, Mario, Ms. Piggy, Winnie the Pooh, and Garfield race a wheelbarrow full of their favorite foods up a hill where they're then meant to throw the food into the fire.

Ms. Piggy manages to beat Mario by mere seconds, causing her to build up a sweat, and Mario attempts to eat her which starts a fight that ends in with Mario pushing her into the fire. Winnie and Garfield initially attempt to help, but Mario tells them to let her cook so they can eat her, which they do. 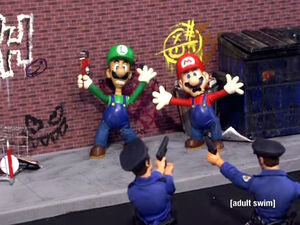 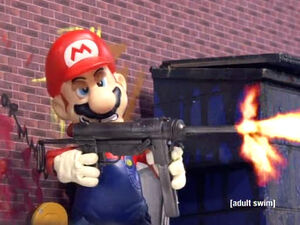