Head of the General Oblation Board

Advance in the Magisterium (failed).

Marisa Coulter is a recurring antagonist in Philip Pullman’s trilogy, His Dark Material. Known as Mrs. Coulter throughout the series, she is an icy and sophisticated villainess and makes her first appearance in the first novel Northern Lights (1995). Her character undergoes several transformations before her reformation in the third book The Amber Spyglass (2000).

She is portrayed by Nicole Kidman - who also played Suzanne Stone in To Die For, Evelyn Stoker in Stoker and Millicent Clyde in Paddington - in The Golden Compass, and by Ruth Wilson in the 2019 TV series His Dark Materials - who also played Alice Morgan in Luther.

A long-time associate of The Church and a high ranking official in the Magisterium, Mrs. Coulter was head of the General Oblation Board, an association that performed harmful experiments on children in The Church’s interest of eliminating Dust. In the series, Dust is a conscious material believed to be related to free thought and Original Sin. Though physically beautiful with a charming and persuasive demeanor, Mrs. Coulter’s character is portrayed as cold, cruel, vicious and powerful, and is written to enjoy the torture and killing of her victims. Despite her charm and charisma, Mrs. Coulter is feared by colleagues, opponents, and subjects of her experiments due to her appetite for cruelty.

For years, Mrs. Coulter pursued The Church’s agenda vigorously with the driven need to advance herself in Magisterium's ranks and successfully achieves her aims. Despite this, Mrs. Coulter’s soft spot is her daughter, 12-year old Lyra Belacqua, the series' protagonist from whom she is on opposite sides. Mrs. Coulter enjoys performing cruel experiments on other children but she devotes herself to protecting her own child, Lyra, from these same experiments.

Lyra is Mrs. Coulter's daughter, a child conceived by Mrs. Coulter and Lord Asriel, Mrs. Coulter's then-lover, in an affair. For a short time after Lyra's birth, Mrs. Coulter hides her daughter away from her husband, Mr. Coulter, and places her with a Gyptian nurse, afraid Mr. Coulter would be angry over her illegitimate daughter. After Mr. Coulter discovers the existence of his wife's daughter, he goes after Lyra in a murderous rage but is killed by Lyra's father Lord Asriel, who saves Lyra. Shamed by Lyra's illegitimacy and only interested in advancing her own career with the Magisterium, Mrs. Coulter gives up a young Lyra to her father, who places Lyra with the scholars at Jordan College and poses as her "uncle". Nonetheless, Mrs. Coulter experiences the maternal urge to save Lyra from The Church and works to protect Lyra throughout the series, despite her power-driven desires, loyalty to The Church, and explicit enjoyment over the suffering of other children. Consequently, Mrs. Coulter experiences a conflict of identity between being Lyra's mother and as a loyal associate of The Church with a powerful career in the Magisterium.

Mrs. Coulter is devoted to The Church and zealously works for the Magisterium as a leading scientist. Throughout Northern Lights and The Subtle Knife, Mrs Coulter is a powerful and high-ranking representative of the Magisterium. She develops projects and heads initiatives, which often include cruelty. These projects are designed to rid the world of Dust (free thought) and advance herself in the Magisterium. However, when Mrs. Coulter learns The Church is interested in experimenting on children, she remembers her own child Lyra and finds Lyra to try and ensure Lyra's safety. Nonetheless, Mrs. Coulter still avidly enjoys developing and performing grisly experiments on other children and works to rid the world of Dust and free thought in any way possible. At the end of The Subtle Knife, Mrs. Coulter begins her reformation, which continues throughout The Amber Spyglass. After killing and maiming a witch for information on a prophecy, Mrs. Coulter learns Lyra is the second Eve who will bring about The Church's downfall. Faced with the choice between her daughter and her ideals, Mrs. Coulter seemingly intends to destroy Lyra to prevent the dissolution of The Church but she defects from The Church and works to save her daughter, hiding Lyra to prevent The Church from killing her. Near the conclusion of The Amber Spyglass, Mrs. Coulter unites with Lord Asriel to defeat Regent Metatron and save Lyra. Mrs. Coulter and Lord Asriel die in the process when they sacrifice themselves to kill Metatron when all three fall through the abyss between universes.

Mrs. Coulter is described as being 35 years old, slim, "beautiful and young" with "sleek black hair" which "framed her cheeks". In the movie adaptation, The Golden Compass, the character's physical appearance was changed to blonde. Author Philip Pullman approved of this change and regretted not making Mrs. Coulter's character blonde in the novels (Butler, Robert. An Interview with Philip Pullman. "Intelligent Life". 2007).

Mrs. Coulter is a published academic and scientist, written as sophisticated, elegant, intelligent and wealthy while she possesses an appetite for cruelty. Despite her feeling that Lyra is too much like Asriel, both Mrs. Coulter and Lyra are shown to be impassioned and talented liars. Her dæmon has taken the form of a golden monkey. His name remains unknown in the books but he is called "Ozymandias" in the BBC radio adaptation of the series. 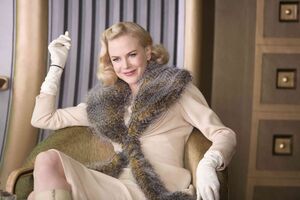 Marisa Coulter in The Golden Compass. 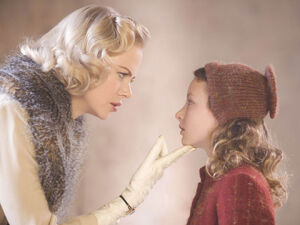 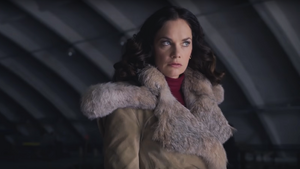 Marisa Coulter in the TV series; His Dark Material. 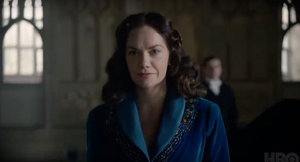 Retrieved from "https://villains.fandom.com/wiki/Marisa_Coulter?oldid=3550285"
Community content is available under CC-BY-SA unless otherwise noted.