Skilled with the sitar, multiple attacks, can multiply, illusions, can break people's minds

Mariska, AKA, The Psychedelic Zombie is a minor antagonist in the videogame Lollipop Chainsaw. She is one of the members of the Dark Purveyors.

She was voiced by Shawnee Smith, who also played Julie Lawry in The Stand miniseries and Amanda Young in the Saw franchise.

Mariska was summoned to earth, along with the other Dark Purveyors members by Swan. She took residence at the O'Bannon Farm. After Juliet killed Vikke, she crash landed near the O'Bannon Farm. At the very start Mariska starts to break Juliet's mind. She created the illusion that her boyfriend; Nick was turned into a zombie, but Juliet managed to break out of the illusion.

Mariska also took the form of Rosalind to trick Juliet. When Juliet reached the bus that "Rosalind" was inside, Juliet and Nick started to noticed that Rosalind was acting strange. Eventually, Mariska revealed herself and all three of them entered into a world of psychedelic. Oddly enough, Mariska welcomes both Juliet and Nick to her world. Despite her welcoming the two, Mariska and Juliet confront each other in a three phase boss battle.

Mariska is always levitating in a bubble for a shield. She uses certain abilities such as bubbles to entrap Juliet generate exploding butterflies. Juliet can't use her chainsaw, instead, she has to use her Chainsaw Blaster. When Juliet knocks out Mariska, she has 10 seconds to cut open Mariska. When Mariska get cut in two, the two halves regenerate. The two Mariskas then tear themselves in two and create four Mariskas. This starts phase 2.

Phase two is similar, except there are four Mariskas to deal with. They also use other abilities such as riding on a tractor and ramming a pillar on Julliet. After the real Mariska is knocked out, Juliet, again, has ten seconds to cut oppen Mariska. When Julliet successfully cuts Mariska in two, Mariska regenerates again, but it appeared to strain her. The two Mariska then tear themselves in two again and regenerating into four Mariskas. The four Mariskas then tear themselves and regenerate into eight Mariskas. This starts phase 3.

Phase three is similar to phase 2, but there are eight Mariskas for Juliet to face. Mariska also has a few other abilities such as creating a giant hand to ram into Juliet. After Juliet knocks out the real Mariska, she, again, has to finish Mariska within 10 seconds. When Juliet successfully cuts open Mariska, Mariska tells Juliet to "Peace out. Way out." Mariska dies by having her head cut off by Juliet's chainsaw. Before she died, Mariska recited the chant to summon Killabilly as she did so.

Mariska is shown to be the least violent of all the members of the Dark Purveyors. She appears to be friendly, calm and peaceful but also a bit deviant. Like most of the Hippie stereotype, she appears to be high, as she appears to be dazed and absent during her confrontation with Juliet. She may also be considered the most mystical of the Dark Purveyors, noting her peculiar super-abilities. Mariska also may be a bit deranged seeing how she gives the middle finger when she said peace, and gives the peace sign when she says Hell.

As a Dark Purveyor, Mariska is quite powerful, and is capable of creating illusions, such as disguising herself as Juliet's sister Rosalind. As such, her entire stage turns out to be merely a mirage. She usually floats in a bubble, which she can also use to imprison her opponents.

When fought in battle, she uses rather unusual attacks, such as trying to run Juliet over with a combine or trying to crush her using a giant version of her hand. She is able to counter being cut in half by Juliet's chainsaw by having each half become a whole Mariska. Every time she does this, she becomes more powerful, and gaining new abilities, such as explosive butterflies. She also as the ability to heal her injuries, if Juliet doesn't perform a finishing move within ten seconds, Mariska can heal a huge portion of her health. 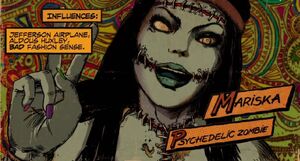 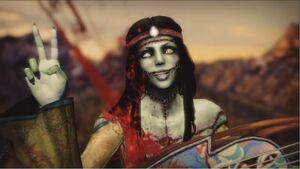 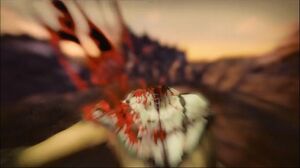 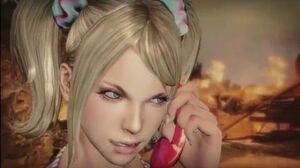 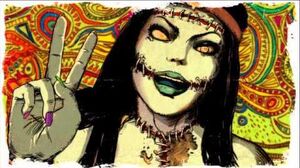