Mark Beaks is first seen in his office, where he has spent days obsessing over Gizmoduck and building a device to set his plot in motion. Later, Fenton tests the abilities of the Gizmosuit, until accidentally firing a rocket and subsequently rescuing Beaks before his helicoptor is blown up. Beaks offers his savior a job at Waddle, but Fenton declines. Unfortunately, due to Fenton's recent mishaps, Gyro decides to fire him and have the Gizmosuit incinerated. Fenton, however, runs off with the suit and consults Beaks to hire him.

Upon being rebranded as Waddle Duck, Fenton realizes Beaks is using him for marketing purposes, meaning only people with the app will be able to recieve his services. This becomes clear when Fenton is forced to do menial tasks across Duckburg but is futile to stop the Beagle Boys because of Beaks' device compromising the Gizmosuit. An irritated Fenton makes his way to Beaks and quits. Beaks responds by stripping Fenton of his armor and stealing his identity as Gizmoduck. Having no idea how to control the suit, Beaks causes it to malfunction from overload, endangering a crowd of people and initiating self-detonation upon himself. Fenton manages to reclaim the suit - rescuing his mother, Huey and Beaks in the process - before disposing of the suit's processor at the risk of his life. As Fenton returns hurt but alive, Beaks is seen sitting in an ambulance by a doctor, phone in hand and a bandaged head.

Beaks is a mostly shallow and self-centered individual, whose only interests are revolved around his image and the attention he gets. As such, he does not care about being rich out of being greedy, but because of the attention that follows it, even claiming that "buzz" is the new equivalent to money in "McMystery at McDuck McManor!" He is openly vain and obnoxious as well, showing nothing less than egotistic views of himself and condescending and disrespectful behavior towards others, whether he knows it or not.

Despite how dimwitted and clueless he seems on the surface, Beaks is actually somewhat intelligent. He is an expert at winning people over with his charisma, and is clever and cunning enough to know how to scam and manipulate his way to becoming a billionaire. He is also proficient at hacking even the most advanced of security systems, even though he uses his talents for petty goals. 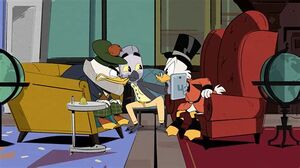 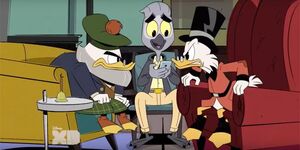 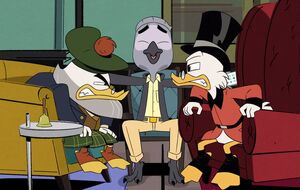 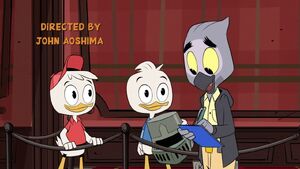 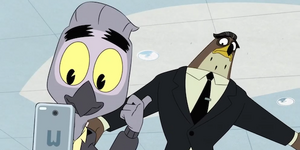 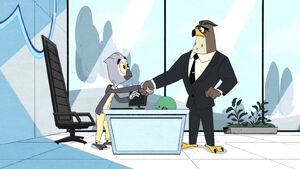 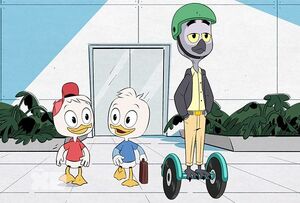 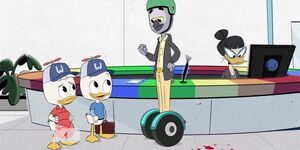 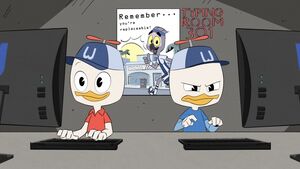 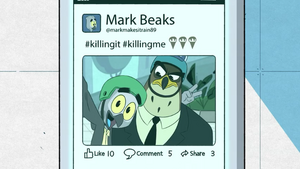 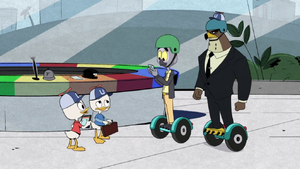 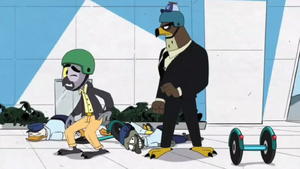 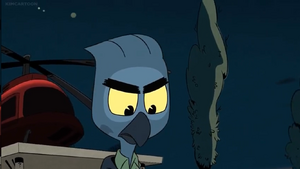 "Gizmoduck...I must have him."
Add a photo to this gallery

Retrieved from "https://villains.fandom.com/wiki/Mark_Beaks?oldid=2672282"
Community content is available under CC-BY-SA unless otherwise noted.