Sell as many drugs as possible and kidnap Tex and Mason (failed).

Mark Jennings (also known as The Hitchhiker) is an antagonist in S.E. Hinton's 1979 novel Tex, and its 1982 Disney adaptation of the same name. He is a dangerous drug dealer who has murdered several other drug dealers and plans to kidnap Tex and Mason McCormick. He used to be good friends with Bryon Douglas in That Was Then, This Is Now, but after he gave drugs to M&M, he was sent to prison, but eventually escaped.

He was portrayed by Željko Ivanek, who also played Andre Drazen in 24, Phillip Swann in Law & Order, Cordell Doemling in Hannibal, and James Devlin in Oz.

After Mark had been selling drugs, Bryon turned him into the police and they arrested him. As he continued to misbehave, he was sent to the state prison. After his escape, he murdered a person and assaulted another one before heading to Tulsa.

When Tex and Mason head down to a pizza restaurant, they then pick up Mark, who points a gun at Mason's chest. He then orders Tex to drive to the state border, while passing the restaurant. He begins discussing about his crimes and if he's ever been in prison before. Tex spots a police car approaching them, but Mark notices it and threatens to kill Mason if he tries anything to attract their attention. With Mark distracted, Tex swerves off the road and into a ditch. This catches the attention of the police and Mark tries to escape, but the police shoot him dead as he tries to take Mason with him.

Tex and Mason are then interviewed on national television about the incident and their father, "Pop" McCormick sees this. He announces that he'll be returning home from the rodeo and arrives the next morning. Later, during class, Tex went to the office to chat with Mrs. Johnson about the hitchhiker and learns that Ms. Carlson went to Mark's funeral. Tex then comes up to Ms. Carlson and asks her about Mark, to which she replies that they've known each other since they were young and that they weren't really friends. 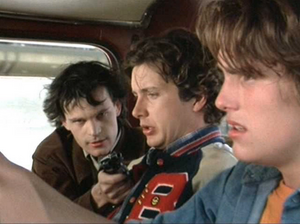 The Hitchhiker holding Tex and Mason at gunpoint.